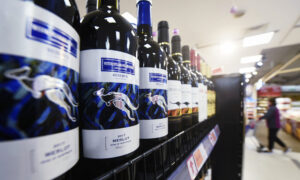 ‘Drink a Bottle or Two’: Global MPs Back Australian Wine in the Face of Beijing ‘Bullying’ and Tariffs
0
Share Now
TelegramFacebookTweetEmailTellMeWeReddit
Copy Link 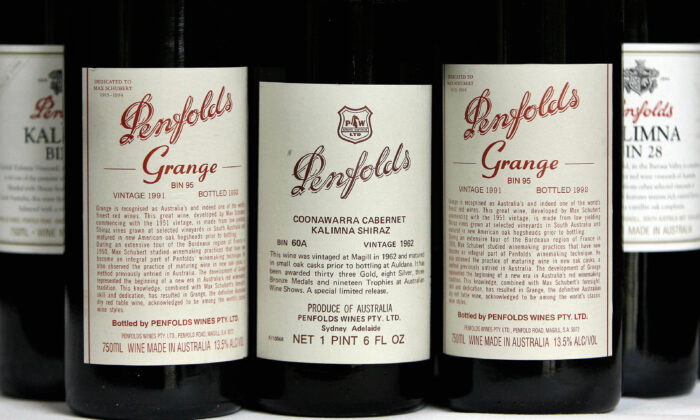 A poor imitation of Penfolds has been found in China. (Greg Wood/Getty Images)
Australia

A Beijing-based journalist has spotted imitations of Australia’s most famous wines on store shelves in China, as the Chinese Communist Party’s trade ban’s on Aussie products remain in force.

Journalist Patrick Fok spotted the wines on Feb.14 in Hainan. Both knock-off wines utilise the same distinctive red and white label as South Australia’s internationally award-winning Penfolds wine. But the imitations go by the name of ‘Benfords’ and ‘Penfunils’ and declare themselves to be Australian wine.

“Spotted in Hainan. Must admit I have never come across these Australian labels!” he wrote in a post on Twitter.

Treasury Wine Estates (TWE), which owns Penfolds, said they were investigating the incident.

“We take any infringement of our Penfolds brand very seriously and we continue to make significant investments in our brand protection program across markets including China,” the spokesman told 9News.

This is not the first time TWE has had to deal with ‘copycat’ imitations being marketed by firms in China. In 2019 the winemaker won court cases against the Australia Rush Rich Winery Pty Ltd, Australia R&R Group Pty Ltd, Rush Rich International Trading Inc., Ltd, and Eastern Tomorrow (Jinjiang) Import and Export Co., Ltd (Rush Rich) in both China and Australia.

In a media statement (pdf) TWE said that they had a zero-tolerance approach to infringing behaviour and that they were willing to take legal action to protect their brands in Australia and around the world.

“The outcome of these proceedings should send a strong message to other copycat operators that their attempts to exploit and infringe TWE’s intellectual property rights and reputation will not be tolerated,” TWE said in its statement.

China has placed huge tariffs on Australian wines, amid a series of trade strikes against Australia after Prime Minister Scott Morrison called for an international inquiry into the origins of the CCP virus pandemic in China and concerns about foreign interference in Australia. Currently, eight sectors have been affected by the bans including barley, cotton, beef, seafood, sugar, timber, and coal exports.

China’s Ministry of Commerce announced last November that Australian wine heading to the Chinese market faces tariffs of up to 212 percent.

The ministry said that it was in response to an anti-dumping investigation into Australian wine, which found that “there is a causal relationship between (wine) dumping and material damage.”

In its latest export review, Wine Australia found that despite a 14 percent fall in wine export to mainland China in the 12 months ended December, the decline had been offset by significant growth in exports to Europe, Oceania, and North America.

“Wine businesses are resilient and are already adapting to these changed market conditions, increasing their engagement in markets other than China, particularly the UK, USA, Canada, and the domestic market,” Chief Executive Officer Andreas Clark said.

The news of the increasing trade came after a global alliance representing 200 parliamentarians from around the world, launched a campaign to support Australian wines in opposition to Beijing’s increased “bullying” of the nation.

The short video that featured members of the global Inter-Parliamentary Alliance on China (IPAC) called on the world to put aside their national beverages during December, and instead buy Australian wine.