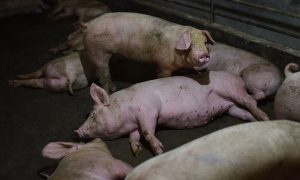 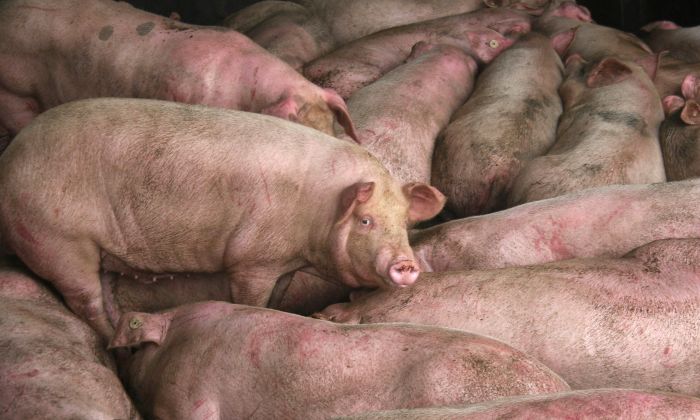 Chinese authorities recently detained two Chinese netizens for posting a video online in which they claimed dead hogs lying on the streets had died of African swine fever (ASF).

The authorities had repeatedly denied that the ASF outbreak occurred in the local area.

On April 25, police in Huangdao District of the coastal city of Qingdao in Shandong Province published a statement, where it said two men named Zhao X Xiu, 57, and Zhao X Ye, 53, were detained for ten and seven days respectively because they had spread an illicit video. The police did not fully identify their names by leaving the middle character out.

In the video that Zhao posted on WeChat, a popular Chinese social media platform, more than a hundred pig carcasses can be seen lying near a body of water and inside three nearby trucks. The trucks were marked “Qingdao Yimin Bio-Environment Company,” a carcasses proper disposal company.

Zhao said in the video: “Now it is 2:30 pm on April 24. Look at the pigs, which are being dispensed from the trucks. They [drivers] want the carcasses to get washed away by the river and into the sea.”

Zhao can be heard arguing with one of the drivers whose jacket is also printed with the Qingdao company name.

At 11:48am of April 25, the Qingdao government published a statement via social media explaining that the drivers in the video were not trying to throw the dead pigs in the river, but were in fact picking up the carcasses for proper disposal.

That same day, local police arrested the two Zhaos with the charge, “spreading rumors and disrupting the public order,” and announced that they were being detained.

The statement claimed that these were not pigs that died abnormally, but did not offer an explanation for why there was such a large mass of dead pigs.

Yang Shaozheng, a former economics professor at Guizhou University, told Radio Free Asia (RFA) on April 26: “The government should have awarded [Zhaos], who helped to expose the information… [The officials] didn’t solve the problem, but instead punished the ones who found the problem.”

Yang is a famous economist in China, but was fired after he advocated for constitutionalism and the rule of law to his students in August 2018.

Risks of the Outbreak

The ASF outbreak was first reported in Shenyang City, northeastern China, in August 2018. Chinese authorities did not provide an official explanation about the source of the virus, but experts suspect that it was imported pork products from Russia, where ASF has raged since 2007.

ASF is a highly contagious and fatal disease affecting pigs and wild boars, and there is currently no cure or vaccine.

The United Nations’ Food and Agriculture Organization (FAO) reported on May 2 that 129 ASF outbreaks have been detected in all of China’s 31 provinces and regions. 1.02 million pigs have been culled so far.

The outbreak has been exacerbated by farmers who have used ASF-infected pig bones or pig blood to make feed for the living pigs.

Bloomberg also ran an April 24 commentary where it noted Chinese officials know the problem, but “shut down media coverage, while underreporting infection and mortality rates for fear of career and political repercussions.”

The report criticized Chinese authorities for treating ASF as “a serious threat to social stability.”

Bloomberg said the Chinese regime’s response to the outbreak so far portends “the incubator for the next pandemic capable of killing millions of humans.”

In recent months, outbreaks were reported in countries neighboring China, including Mongolia, Vietnam, and Cambodia—regions that did not have the disease prior to the China outbreak.

Russian veterinary watchdog Rosselkhoznadzor claimed on April 15 that the recently discovered ASF-infected pork sausages in the Zabaykalsky Krai region were imported from China. There had been no ASF outbreak previously in this region. Rosselkhoznadzor alerted the local government to strengthen protection because it borders the Chinese region of Inner Mongolia.

On April 23, South Korean media DailyNK quoted the information from several sources in Pyongyang that ASF had been detected in North Korea since February.

The Pyongyang regime has completely banned all pork sales since the end of February, but “many residents bought pork secretly because the dead and culled pigs are cheap.”