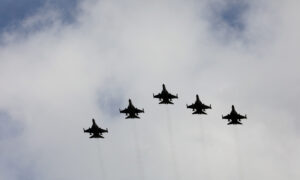 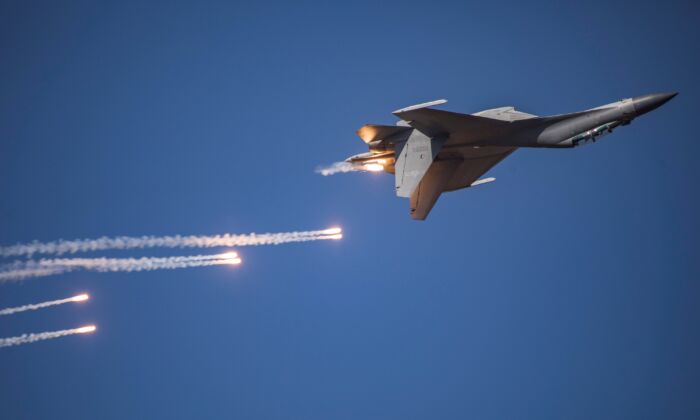 A J-16 fighter jet performing in the sky in Changchun in China's northeastern Jilin province on Oct. 17, 2019. (STR/AFP via Getty Images)
Chinese Regime

Chinese bomber and fighter jets have entered Taiwan’s airspace at least 46 times from Sept. 17 to Sept. 24, in an escalation of military aggression that has angered Taipei.

The latest was on Thursday, when a Chinese anti-submarine aircraft entered Taiwan airspace, Taiwan’s Ministry of National Defense announced.

Also on Thursday, China’s national defense ministry spokesman Tan Kefei confirmed in a video press conference that its two aircraft carriers, the Shandong and Liaoning, performed offshore training and tests together, though he did not disclose where. Taiwanese media expressed concerns that the tests could be in preparation for actions against the island.

Tensions have risen in recent months between Taipei and Beijing, which claims the democratically-run, self-ruled Taiwan as its own territory, to be taken by force if needed.

On Monday, Beijing stepped up its hostility, by claiming there is no mid-line in the Taiwan Strait that separates mainland China and Taiwan airspace—asserting that all the airspace there belongs to Beijing.

Taiwanese and Chinese combat aircraft normally observe the mid-line of the Taiwan Strait and do not cross it, although there is no official agreement between Taipei and Beijing on doing so, and the rule is observed unofficially.

But Wang Wenbin, spokesman for China’s foreign ministry, said at a Monday press briefing: “Taiwan is an inalienable part of Chinese territory. There’s no so-called mid-line of the Taiwan Strait.”

Taiwan President Tsai Ing-wen then visited an air base in Penghu island, located in the middle of the Taiwan Strait, to show appreciation for Taiwan’s troops. “How can we let others show off in our airspace?” she said on Tuesday.

The Chinese regime and Taiwan have no legal border in the strait, but have generally followed the mid-line policy since 1954.

Since 2016, Taiwan has reported five Chinese incursions across the line, including two last week on Friday and Saturday. Taiwan scrambled jets to intercept them.

Earlier in the month on Sept. 5, state-run China Military TV also posted a three-minute video of a joint landing exercise performed by the amphibious force, naval warship troops, and air force, in waters close to its southern Guangdong Province—not far from Taiwan.

The flurry in Chinese activity prompted Taiwan’s Ministry of National Defense to issue a strongly-worded statement on Sunday: while the Taiwan military “will follow the principle that does not provoke…it will definitely fight back once it is attacked.”

Taiwan premier Su Tseng-chang also condemned Beijing’s actions while speaking to reporters on Tuesday: “Taiwan is a sovereign and independent country… China keeps on disrupting Taiwan by sending out warplanes and warships, which damages regional peace and stability. These are not actions that a responsible country should do.”

After Chinese spokesman Wang made the claim about the mid-line policy, Taiwan’s foreign minister Joseph Wu told media before Tuesday’s EU Investment Forum 2020 in Taipei that Wang’s rhetoric was “equal to destroying the current status of the Taiwan Strait.”

Wu also urged the international society to condemn the Chinese regime for its provocative actions.

The drills came as Beijing expressed anger at the visit of a senior U.S. official to Taipei.

U.S. Secretary of State Mike Pompeo on Friday accused Beijing of bluster when asked about the Chinese activity.

China has been angered by stepped-up U.S. support for Taiwan, including two visits by top officials, one in August by Health Secretary Alex Azar and the other last week by Keith Krach, undersecretary of state for economic affairs.

The United States, which has no diplomatic ties with the island but is its strongest backer, also plans new arms sales to Taiwan.