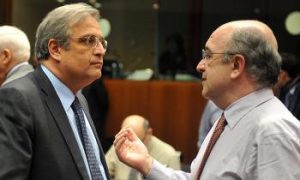 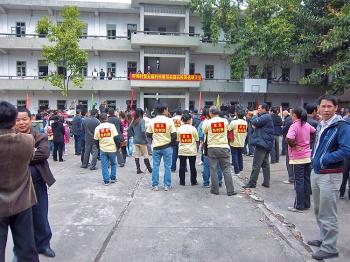 By Tang Ming
Print
Village elections have been touted by the Chinese Communist Party as a kind of democracy in China, but election results in at least one village last month left villagers disillusioned. They say the elections were a farce, and gangsters who have bullied and oppressed them for years are now the new members on the village committee.

“The result of the election of the village committee’s members completely disappointed villagers’ expectations,” Huang Peng, a resident of Hebu Village, Jianggao Town, Guangdong Province, told The Epoch Times after the March 26 election outcome there.

“All of the members elected are gangsters. They are also the very same group that had been used by the government to expropriate villagers’ land all these years. It is impossible for villagers who have been bullied and oppressed [by them] to have selected them. Surely, it must have been unfairly manipulated by the election commission, which cares nothing about democracy,” Huang said.

Mr. Wang, another villager, said, “With gangsters as our leaders, our villagers will have a hard time surviving. In recent years, these new village committee members did many bad things, especially last year they, along with the village cadres, expropriated our land by force.”

Another resident who did not want to give his name said, “More and more contradictions exist between officials and ordinary citizens. Accordingly, governing through violence is more and more favored by authorities. That explains why we have this [election] result.”

Human rights lawyer Mr. Bao, responding to a query by The Epoch Times, said he did not know exactly how they plotted to win the election secretly, but that it showed there were problems with the election system. And it’s not the first time in a rural area, he said.

A democracy advocate in Guangdong said that more than one thousand villagers voted in the Hebu village committee election, hoping to elect a village head that could stand up for them. But in the end, he said, the election was a farce. He said that through manipulating elections any violent group can get their hands on the levers of local power—and he suggested that this is what the Communist Party as a whole fosters.

Since the revenue for local governments comes from land sales, forced evictions and land grabs are endemic in China.

Villagers in Hebu say that in 2009 local cadres and the heads of local economic committees conspired with Jianggao town officials to illegally expropriate villagers’ land, offering unreasonably low compensation. Some villagers were forced to sign their names through threats from who they called “gangsters.”

In February 2010, the leader of the land expropriation task force led many such “gangsters” into the village to intimidate locals. The villagers attempted to take them to the police station, but the leader of the group escaped, and police were not interested in getting involved, which made the situation worse, villagers said in accounts posted online.

In March 2010 the hired gangsters cut electricity to the village, forcing locals to move out. They were unable to irrigate their fields.