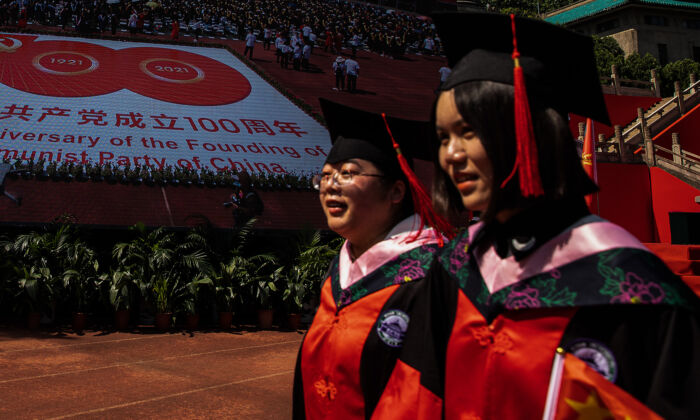 Two graduate pass through the big screen showing the centenary of the CCP in Wuhan University in Wuhan, China, on June 23, 2021. (Getty Images)
Chinese Regime

One China analyst describes the Chinese Communist Party’s (CCP) objective of indoctrinating students across the country as “brainwashing.”

“Xi Jinping Thought,” dubbed “socialism with Chinese characteristics in the new era,” consists of 14 guidelines that the Chinese are expected to follow, including upholding the principles of marxism and communism, and ensuring that the CCP’s leadership presides over all aspects of work and life.

“These documents expose the CCP’s fear of Chinese students,” Chinese commentator Li Linyi told The Epoch Times. “[The CCP] is obviously afraid that the June 4 student [pro-democracy] campaign will come back.”

“That’s why the regime is introducing Xi Thought in Chinese universities, attempting to strengthen its ideological and political work on students—brainwashing students,” Li said.

In 1989, Chinese students protested peacefully in Tiananmen Square, demanding democracy and an end to government corruption. Then on June 4, tanks and soldiers marched into the square and attacked the protesters. Although there are conflicting estimates on the death toll, a secret British diplomatic cable alleged that at least 10,000 people were killed, citing a source within the CCP.

According to the document titled, “2019 Key Tasks,” the provincial authorities want to step up the initiative of monitoring the political indoctrination at universities, which includes a cyber team to track and control information that’s circulated among students and staff.

Harbin City Vocational College has implemented these key tasks since 2020, with plans to continue into 2022. One of the tasks, which it calls “Young Marxists Scheme,” is to create “future reserve talents” by indoctrinating at least 10 percent of first and second year students with Marxist ideology.

The universities also employ tutors to teach and enforce “Xi Jinping Thought.” They are also full-time staff members in tertiary educational institutions in China. The tutors communicate with the students on a daily basis and monitor their progress in accepting the teachings.

According to the documents, Harbin University of Commerce and Qiqihar Medical University require their tutors to “closely monitor the students’ day-to-day activities,” and “to be solely responsible for the daily ideological and political education and management of students in their quarters.” They are also required to do “in-depth implementation of Xi Thought.”

Qiqihar Medical University also requires its tutors to do “a heart-to-heart talk” with students at least once a week in their dormitories. There is a 24-hour roster of tutors who oversee the dormitories to ensure “non-stop”political indoctrination of students, the documents said.

Heilongjiang Preschool Education College stated in its 2020 annual summary report on ideological and political courses that it set up a “one-on-one scheme” for veteran teachers to train new instructors.

Harbin University did a rolling survey in 2017 on the status of the ideological and political thinking of instructors and students. The university conducted an investigation on social issues concerning students, including elements that influence their notions, the current political views of educators and students, and their comments on the CCP.

Daniel Holl contributed to the article.