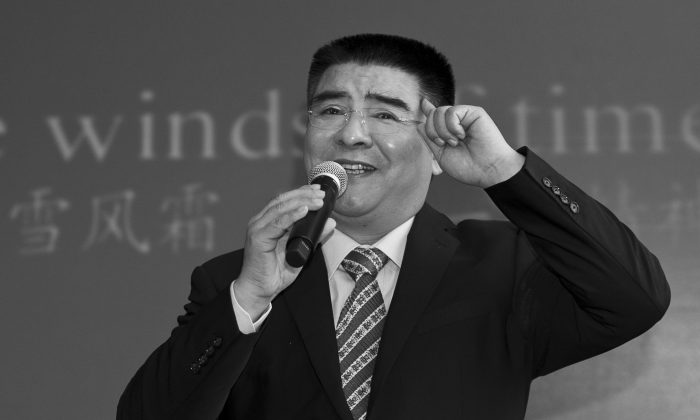 At a January press conference in uptown Manhattan, Chen boasted about plans to buy The New York Times, sang karaoke, and then, without meaning to, revealed his political affiliations, by bringing out two disfigured women, said to be burn victims, and promising to pay for their facial reconstruction.

Then in June, Chen enticed over 200 of New York’s homeless to a steak lunch in Central Park with the promise of a $300 give-away. He entertained them by crooning a communist ballad and doing magic tricks, and then vanished after barely fulfilling his pledged payoff.

Now, the respected Chinese business publication Caixin is calling Chen a fraud. Other Chinese websites have piled on, mocking his recent foray into weight loss supplements.

But the scrutiny of the self-styled philanthropist seems to as much about Chen’s political ties as his buffoonery. Given the affiliations of Caixin, it is likely that the exposé of Chen are part of Chinese Communist Party leader Xi Jinping’s efforts at thinning out a rival faction overseen by former Party boss Jiang Zemin.

Chen Guangbiao, 48, first gained prominence in China in the aftermath of the 2008 Sichuan earthquake for being personally involved in disaster relief work. He is also known for handing out name cards with bombastic titles like “Most Prominent Philanthropist of China” and “China’s Foremost.”

Most of Chen’s acts of charity seem like over-the-top attempts at publicity and image-building—he gave a wall of cash to the poor in southern China, and once danced on donated cars in a lime-green suit.

Some of Chen’s efforts at generosity, however, are outright shady.

On Sept. 20, Caixin ran a lengthy investigative report titled, “Chen Guangbiao: ‘Chief Philanthropist’ or ‘Chief Swindler’?” in which it denounced the businessman and his purported deeds.

The Caixin piece also notes that for a philanthropist, Chen isn’t very charitable. Chen once claimed, for instance, that he donated money to multiple elementary schools in Jiangsu via foundations, but Caixin found that these organizations had in fact not received a single cent. Chen says that he does not keep a record of his donations, and they are usually made in cash.

Another quirk involved Chen’s claim that a leading state science academy had developed his new line of weight loss supplements. The Chinese Academy of Sciences told Caixin that it has “no connection” with Chen’s products.

Caixin’s doubts aren’t new. In 2011, politicians in Taiwan hesitated to issue Chen a week-long visa because they feared he could be advancing the Chinese communist regime’s political agenda. Chen, however, has repeatedly claimed that he isn’t affiliated with the Chinese authorities.

He seems to be tightly affiliated with at least some elements of the political system, however.

In 2014, when Chen went to New York, the two disfigured Chinese burn victims are a demonstration of this. The women are said to be the same participants in the Tiananmen Square self-immolation incident of 2001, in which Chinese authorities, it was later discovered, perpetrated a Hollywood-style propaganda display, gathering a motley group of Chinese to set themselves aflame and then claim that they were adherents of Falun Gong, a meditation discipline that had in 1999 been marked for elimination. The campaign against the group had previously been seen as confusing and unnecessary — but the immolation propaganda gave Party authorities a renewed license to attack the practice.

It is two of the participants in this event whose cosmetic surgery Chen promised to pay.

For observers of China’s political system, the question is how Chen Guangbiao was able to gain access to the women, and then bring them outside the country.

As expected, the Caixin exposé finds that Chen is associated with not one, but two former top cadres.

The first of Chen’s high-level links is Ling Jihua, the disgraced ex-head of the Party’s General Office and the United Front Work Department. Caixin claims that Ling is behind Chen’s philanthropist gimmick.

The second is Li Dongsheng, formerly a deputy director in state mouthpiece broadcaster China Central Television, and, for four years before he was purged in 2013, the head of the “610 Office,” a Gestapo-like organization responsible for overseeing the persecution of Falun Gong. Caixin notes that Chen and Li “got to know” one another after Li left his post at CCTV, and suggests commercial ties between the men.

Analysts of Chinese politics think the exposé is not just targeted at Chen, but could be an attempt to bait and implicate his shadowy backers.

Heng He, a China analyst and commentator, said that the Caixin article is aimed at outing the elements in the 610 Office that arranged for Chen to showcase the “Tiananmen self-immolators” in New York.

Given the highly sensitive nature of anything having to do with Falun Gong in China, it is likely that Chen had backing from “the highest levels,” that is, former Party boss Jiang Zemin or his closest associates.

In a talk show on Chinese-language broadcaster New Tang Dynasty Television, Chinese current affairs analyst Chen Pokong says that the Chen Guangbiao exposés means that “he will definitely be arrested” in the near future.

Although Caixin is not a state-owned media, its chief editor Hu Shuli is a longtime associate of Wang Qishan, head of the Party’s anti-corruption agency. Caixin has consistently reported on corrupt officials purged under Xi Jinping’s anti-corruption campaign, and is considered to carry the messaging of Xi and Wang.