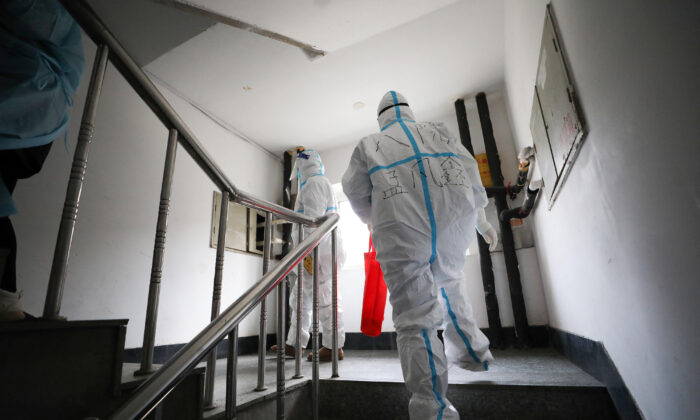 Medical workers prepare to conduct nucleic acid tests for the Covid-19 coronavirus on residents who can't leave their premises in Shenyang, Liaoning Province, on March 23, 2022. (STR/AFP via Getty Images)
INSIDE CHINA

A well-known Chinese TV host for the Liaoning provincial TV network was suspended and punished on April 5 for revealing the severity of the local COVID-19 outbreak on her social media. Her suspension caused an uproar on Chinese social media.

Zhu Xia is the presenter of a few popular shows on Liaoning Radio and Television Metropolitan Channel, including “In Action,” “New North Meets the World,” “News Front,” and “Urban Traffic Light,” and has a certain influence among local audiences.

In a recent live broadcast on social media, she vaguely warned audiences of the seriousness of the local pandemic in Shenyang, the provincial capital of Liaoning, and reminded people to be extra careful. During the live chat with the audience, someone asked about the pandemic in Shenyang. The Chinese communist regime is known for concealing the real situation of COVID-19 outbreaks in China and has been questioned by the outside world for underreporting the infection numbers. The northeast part of China, including Liaoning Province, has been hit hard by this round of  outbreaks.

Zhu Xia said, “Friends in Huanggu District (Shenyang City), listen to me, I can’t say why or give you any reasons, just listen to me, you must take personal protection before going out.”

She also warned, “There will be a regional COVID-19 nucleic acid test in the afternoon in Huangpu District. Everyone is in danger. You are even in more danger in Huanggu District, do you understand? You must take personal protection!”

The Epoch Times obtained the video clip of Zhu’s warning in her online live chat.

According to a report on Sohu.com, one of mainland China’s online news portals, on April 5 the Liaoning Radio and Television Group issued an internal notice to punish Zhu. The notice stated that Zhu spoke on the online live broadcast without the approval of the channel director. Liaoning Radio and Television Group has issued orders prohibiting any TV presenter from making pandemic-related remarks on his or her personal social media account.

Liaoning Radio and Television Group suspended all Zhu Xia’s work for the media and removed her from the position of head of the broadcasting management department. Zhu’s social media account was temporarily suspended as well.

Liaoning Radio and Television Group is a provincial-level state-owned radio and television organization in Liaoning Province, and is a public institution directly under the Liaoning Provincial Committee of the Chinese Communist Party (CCP).

The news of Zhu being punished for speaking out triggered heated discussions on Chinese social media.

One netizen posted: “Before her, there was another one, Zhao Pu, the host of CCTV (China’s national TV network), was forced to resign because he insisted on telling the truth. When all the normal people who tell the truth are treated as abnormal people, and there are only a group of hard-core party mouthpieces left in the media, lies will prevail. ”

Li Jin contributed to the report.