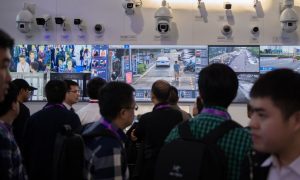 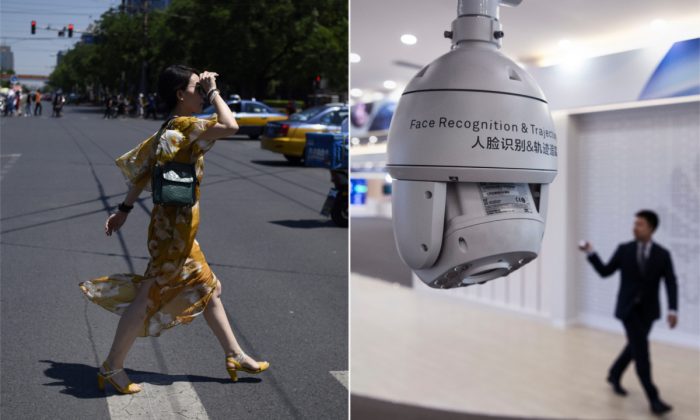 Invasive surveillance has gone from an unsettling idea to a pervasive reality within the borders of mainland China. Cameras carpet China, with 100% coverage of surveillance cameras in major cities, similar to what George Orwell describes in “1984,” with screens watching people at every turn, even inside their houses.

Now, the Chinese Communist Part (CCP) has taken new steps to justify its monitoring of citizens’ every step, even in a literal sense.

In Taiyuan City, the capital of Shanxi Province, a screen which does nothing more than display citizen’s faces has been installed under a crosswalk display, according to a report from The Beijing Times on May 25. Anyone, young or old, will have their face publicly displayed if the surveillance’s artificial intelligence (AI) classifies the person as walking through a red light.

The top image is real time footage of an individual while they were caught crossing the street through a red light. The bottom image is a picture used for the individual’s government issued identification.

In footage taken by a Beijing Times reporter, different individuals’ faces are displayed on the screens for roughly 20 seconds at a time, before cycling to another individual.

Advances in AI technology has been widely used by the CCP as a control measure on its citizens. Since people are not fined or detained for this behavior, police have justified their actions.

However, China’s use of surveillance, especially in Tibet and Xinjiang, is primarily a tool of suppression.

Chinese police confirmed that both the faces of adults, as well as minors, are displayed without the use of mosaics or blurs to hide their identity, according to The Beijing Times. A mosaic or a blur are image editing technology commonly used to hide one’s face and identity.

“Its just a warning to have their picture on the screen,” an unidentified officer working for the Taiyuan Traffic Police told The Beijing Times in a phone interview. “It’s just a warning if someone doesn’t receive a ticket, it’s telling them to not walk through red lights.”

Police gave the reason that since no ticket was issued, it only counts as a warning—this justifies the publicizing of the individual’s identity.

The officer confirmed in an interview with The Beijing Times that anyone’s face would be displayed on the screens if they jaywalked through red lights.

The officer said that their image would be cycled through the screen with other jaywalkers. “It’s for for about one to two weeks,” the officer told The Beijing Times.