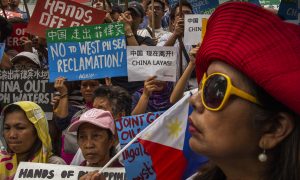 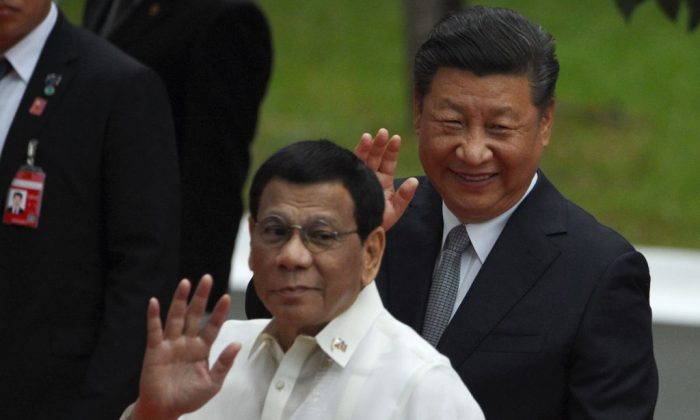 Chinese leader President Xi Jinping (R) and Philippines' President Rodrigo Duterte waves to members of the media after inspecting the honor guard during a welcoming ceremony at the Malacanang Palace in Manila on Nov. 20, 2018. (Ted Aljibe/AFP/Getty Images)
Social Issues

A Chinese international student who was arrested after throwing a tantrum inside a metro rail transit station in the Philippines has added fuel to existing anti-China sentiment in the Southeast Asian country.

On Feb. 9, a first-year Bachelor of Fashion student at the SoFA Design Institute named Zhang Jiale was stopped by a Filipino police officer at the turnstile of a station in Mandaluyong, a city in the greater Manila area, because she was carrying a cup of “taho,” according to local media. Taho is a Filipino soft tofu snack.

Zhang, 23, was told by the officer to finish the taho before proceeding because of a no-liquids policy on the trains. The woman didn’t comply and began arguing with the officer. Eventually, she hurled the liquid at him, and was arrested.

According to a local newspaper, the Manila Standard, the officer filed a complaint against Zhang on Feb. 10, charging her with direct assault, disobedience to an agent or a person in authority, and unjust vexation. If found guilty, she faces four months to four years in prison; Zhang also faces the possibility of being deported, according to a Feb. 12 article by digital newspaper The Philippine Star, which cited the Philippines’ Bureau of Immigration.

Zhang’s actions were caught on camera, and the video quickly spread on social media. According to a Feb. 11 article by Singapore-based English-language daily The Strait Times, some Filipinos on Facebook and Twitter called her actions “arrogant” and “disrespectful,”  while others have said her behavior was a manifestation of how many mainland Chinese view the Philippines—as a subservient vassal state.

Philippines Vice President Leni Robredo, while speaking on her weekly radio show on Feb. 10, said that Zhang’s behavior was disrespectful toward the officer, and also to the country, according to Filipino media ABS-CBN.

Robredo also said that Zhang’s behavior was a “wake-up call” about the heavy presence of mainland Chinese in the country.

According to ABS-CBN, the Senate of the Philippines began an investigation in November last year into the increase in illegal foreign workers in the country, especially Chinese nationals.

The relationship between China and the Philippines has been rocky at times due to territorial disputes in the South China Sea, as islands and reefs in the region are claimed not only by the two countries, but also by Brunei, Taiwan, Malaysia, Vietnam, and Indonesia.

In November last year, when Chinese leader Xi Jinping visited the Philippines, local protests were organized at multiple locations, including the Chinese embassy in Manila and the Chinese consulate in Makati City, with protestors opposing Chinese investment with signs that read “No to China’s debt trap.”

Concerns about China’s threat to the Philippines’ national security came up in January, when two Chinese shipbuilders, one of them state-owned, expressed interests in taking over the shipyard business at Subic Bay, after its operator—South Korea’s Hanjin Heavy Industries and Construction Philippines—filed for bankruptcy protection, according to local media.

Former Philippines Navy chief Alexander Pama warned about the possible Chinese takeover. “The ownership of Hanjin shipyard in Subic Bay will give the owners unlimited access to one of our most strategic geographic Naval and Maritime asset,” Pama said, according to a Jan. 13 report by Philippines news site Politiko.

“I urge our patriotic business community and the government not to allow Hanjin Shipyard to fall into the wrong hands,” he added.