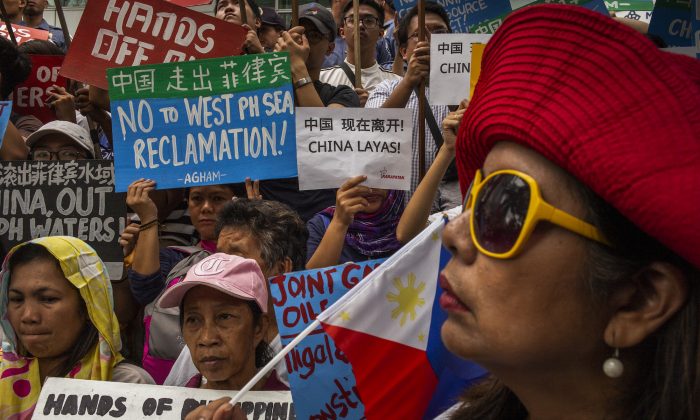 Chinese leader Xi Jinping’s recent two-day visit to the Philippines ended with dozens of trade deals and economic agreements signed, in a further indication that the Southeast Asian country’s president Rodrigo Duterte is pivoting closer to China’s sphere of influence in the region.

Meanwhile, Duterte’s latest gestures toward China, even as the latter bulks up its sovereignty claims in the South China Sea with increasing militarization, were met with opposition from Filipinos. During Xi’s visit on Nov. 20 and 21, protesters gathered near the Chinese embassy in Manila, the Chinese consulate in Makati City, and at local universities, according to local media, including The Philippine Star and Rappler.

The protesters carried placards reading, “No to China’s debt trap,” “Philippines is not for sale,” and “China, get out!”

Conchita Calzado, a resident near where the China-funded Kaliwa Dam is slated to be built, told Reuters that “these dams will not help us, because we believe these are just loans and our people will not be the only ones burdened, but everyone, too.” The dam is estimated to cost roughly 18.72 billion Philippine pesos (about $358.7 million), according to Filipino broadcast network GMA.

China-funded infrastructure projects in countries such as Sri Lanka and Djibouti have drawn criticism for burdening poor nations with massive debt.

“The agreements between our two countries are not totally fair. China’s investments are purely for its own interests. If the agreement is not advantageous to the Chinese, they will give up their promises,” protester Marianne Dardard told Radio France Internationale in a Nov. 20 interview.

About two years ago, Duterte announced that he would reposition the country’s foreign policy away from the United States, its historic ally, and move closer to China. Local sentiment is negative toward China, despite the two governments’ warming ties. Malaysian newspaper The Star cited a recent social survey, in which most Filipinos said they had “poor” trust of China but “very good” trust in the United States.

Even as China and the Philippines disputed over territorial claims in the South China Sea, Beijing has wooed Manila with economic investments. About half of the 75 infrastructure projects that are part of Duterte’s signature economic program are earmarked for Chinese loans or investments, according to Reuters. Most have yet to start construction.

Net foreign direct investment from China has also grown dramatically, to $181 million for the first eight months of this year from $28.8 million for all of 2017, according to the Philippine central bank.

The opposition party and other Duterte critics have accused him of allowing Beijing to threaten Philippines’ sovereignty in exchange for economic perks.

Such accusations came to a head on Nov. 20, after Xi and Duterte signed a memorandum of understanding for joint oil and gas development in waters that include disputed territory.

Opposition senators demanded that Duterte reveal more details about the plans, warning that the deal could affirm Chinese sovereignty in an area where both the Philippines and China stake claims.

“Signing the Chinese deal will make the Philippines recognize an unlawful ‘co-ownership’ with China,” the minority senators said in a resolution on Nov. 20.

As such, the senators said any agreement with the Chinese regime would be a violation of the constitution, and an impeachable offense.

The senators’ rebuke came as U.S. think tank Center for Strategic and International Studies released new satellite images on Nov. 20 that revealed China had installed a new platform on the Bombay Reef, an atoll in the disputed Paracel Islands chain of the South China Sea.

The think tank spotted a new structure topped with solar panels and a radome (a dome usually for protecting radar antenna) on the reef. While the purpose of the new installments was unclear, it could be for military use, the think tank said.