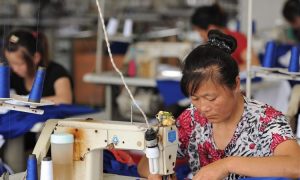 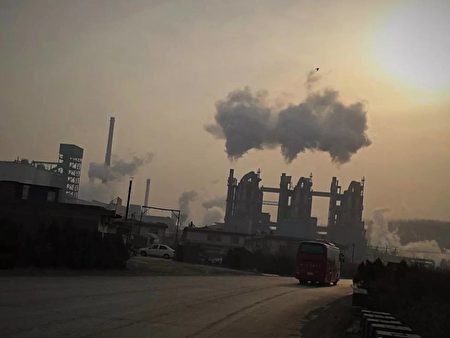 In mid-April 2019, an aluminum factory in Xiaoyi City, Shanxi Province, China, illegally discharged wastewater into the nearby rivers and emitted black smoke directly into the air, which polluted the groundwater and seriously affected the lives of nearby residents. When two young men reported the pollution to the local Bureau of Ecology and Environment (BEE), they were put into detention, beaten, and starved for their efforts.

After he was released, Xiao Zhang (pseudonym), a 26-year-old Chinese student,  came to study in the United States in 2019. He recently told The Epoch Times (Chinese edition, hereinafter referred to as “The Epoch Times”) about the suffering he experienced after he reported industrial pollution to the authorities in China.

Zhang recalled that the water from the faucet at home was white and smelled bad. It couldn’t be used for domestic purposes. The same water source was used to irrigate farms, which affected the growth of crops in recent years, and resulted in reduced food production.

“The polluting emissions from the factory chimneys day and night are so pungent that people complain, children develop rashes that are hard to treat, and residents have to wear masks on their daily trips,” he said,

Since the lives of the local residents were deeply affected by the pollution caused by the factory, Zhang and his friend Mr. Zhao (pseudonym) decided to speak up for everyone’s rights. They took photos of the pollution and collected other evidence.

On April 30, 2019, Zhang and his friend started a petition, which 23 residents signed. On the same day, they officially sent the report letter, photos, and evidence, along with the petition, to the local environmental protection authorities  using their real names.

On May 15, 2019, they received a warning from the local bureau of ecology and environment, which also asked them to withdraw their report.

The residents were very upset by the response. Zhang said, “We are making reasonable claims.” Therefore, Zhang and his friend Mr. Zhao decided to continue with the reporting, and this time, they wanted to get more support.

On May 30, 2019, Zhang and Mr. Zhao gathered more residents to discuss possible solutions, still full of enthusiasm at the time, believing that if everyone worked together to expose the truth, there should be a resolution.

Therefore, they made 500 copies of the report letter and distributed them locally, hoping to draw attention to the matter and also get the attention of the local government officials.

The attention of the local authorities did come, but in a way they hadn’t expected.

“Neither of us would expect such a nightmare,” Zhang told The Epoch Times.

On July 30, 2019, both men were detained and interrogated by the police. During the interrogation, they were beaten, and charged with  “disorderly behavior,” “unlawful assembly,” and “disturbing public order.”

Zhang was directly put into administrative detention without any legal procedure. During the 15 days of detention, he was not provided with normal meals, and the police also physically tortured him.

“These hooligans in uniforms [the CCP police] beat me twice and starved me for a few consecutive days. I didn’t feel well, but they refused to get me a doctor.”

Both Zhang and his friend Zhao were held for 15 days.

“The detention center was like hell,” he said, still feeling chilled to the bone when recalling the horrible experiences.

He told The Epoch Times that the police had deleted most of the photos he had taken of the pollution and torn up the signatures of the local residents. So their reporting efforts ended up in vain.

On August 14, 2019, 15 days after Zhang was detained, the police informed his father he must pay a “guarantee fee” of about $7,700 before they would release his son.

Zhang said that neither he or his family received a receipt for the fee and that the police demanded that he come to the station when summonsed They said they still had the right to interrogate and investigate him, and they even threatened and intimidated his family.

“What they [the CCP police] have done is illegal and is a violation of human rights,” Zhang said.

Zhao, however, is still under surveillance in China.

Zhang met with Zhao to say goodbye before leaving for the U.S.  “He seemed to have become a different person. He was reluctant to speak and very depressed,” Zhang said.

Before reporting the pollution, Zhao had obtained a job at a local state-owned enterprise in July. However, after the detention, the company dismissed Zhao without giving him a reason.

Zhang said, “We both know the reason he was rejected was our investigation and reporting of the pollution [caused by the aluminum factory]. He tried looking for another job, but no decent company would hire him. Right now, he has very little income, and I heard that he is still unemployed.”

Zhao used to be an optimistic and cheerful young man, but he became cowering and timid after experiencing torture in the detention center. Still under police surveillance in China, Zhao has no freedom. With the CCP’s continuing intimidation, it is extremely difficult for him to get a job, Zhang told The Epoch Times.

Determined to Be Courageous and Continue to Speak Up

Many people like  Zhang who have spoken out for themselves and their hometown have either been silenced by the CCP, or worse, disappeared.

“There is no justice in China, and in Communist-ruled China, those in power do not solve issues; they solve those who raise the issues,” Zhang said.

He said that he was deceived by the CCP before. But after he suffered for reporting the pollution, he finally woke up. Now that he is living in a free country, he has decided to speak up.

“After going through the horrible experiences, I have come to see the evil nature of the CCP. I want to gather the courage to share my real experiences, hoping to awaken more people,” Zhang said.

Zhang finally understands that the Communist regime will do everything possible to cover up and suppress anything or anyone that is likely to affect its authority.

“The CCP uses anti-humanity means to cover up the truth and consolidate its authoritarian rule. Isn’t this global pandemic a perfect example of that?” Zhang said.

Cathy Zhang and Sophia Lam contributed to the article.