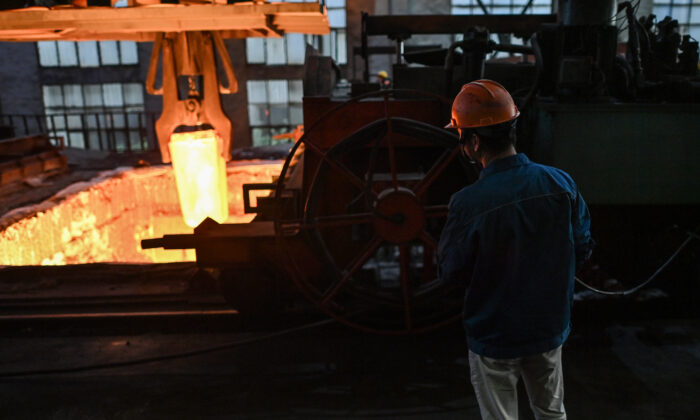 A worker operates a crane to transport a block of steel into an oven during a government organised tour at a Tiangong International plant, makers of high quality steel and tools, in Zhenjiang in China's eastern Jiangsu province on Oct. 12, 2020. (Hector Retamal / AFP via Getty Images)
China Business & Economy

Chinese steelmakers have reported significant losses from weak demand and low prices. Data released on June 28 showed that only 15 percent of Chinese steel mills remain profitable, a 27 percent drop from the first quarter and a 59 percent plunge compared to the same period last year.

According to China’s National Bureau of Statistics, pig iron and crude steel declined 5.9 percent and 8.7 percent year on year; cumulative exports and imports of steel fell 16.2 percent and 18.3 percent, respectively; and imports of iron ore and concentrates dropped 5.1 percent.

According to the state-owned Finance China, in June, stockpiles from key Chinese steelmakers reached 20.52 million tons, an increase of 2.58 million tons from May and a year-on-year increase of 4.83 million tons, hitting a record high in steel inventory.

According to Baiinfo, a Chinese commodity market information provider, the top three steel-using sectors in China are construction, machinery, and vehicle manufacturing.

The construction industry uses the most steel, accounting for 49 percent, while machinery and vehicle manufacturing account for 18 percent and 17 percent, respectively.

China’s property market has declined since 2021 and is still heading on a downhill trajectory owing to widespread COVID-19 curbs weakening buyer confidence and market demand.

With tumbling sales, short-term debts, and a lack of offshore refinancing, Chinese property developers are facing a liquidity crisis.

In the first half of 2022, nearly 500 regulatory changes were made in more than 180 cities across China in an effort to stimulate the property market, according to Sina Finance. However, such intensive stimulus efforts still failed to reverse the downward trend.

According to China’s National Bureau of Statistics, property sales fell 31.5 percent in the first five months compared to the same period last year, while investment and new construction activities dropped by 4 percent and 30.6 percent, respectively.

As steel goes hand-in-hand with construction, the massive decline in construction activities has resulted in a significant reduction in steel usage across China.

According to the Statistics Bureau, Beijing expanded the infrastructure budget by 6.7 percent in the first five months compared to the same period last year. However, despite the effort, many planned construction activities were halted by interruptions in logistics and transportation under Beijing’s zero-COVID policy.

As construction activities decline, demand for many types of construction-related machinery has also taken a hit.

According to the China Construction Machinery Association (CCMA), domestic excavator sales between 26 manufacturers in April were about 16,000 units, down 61 percent year-on-year. Among them, sales of large-sized excavators fell 59.9 percent, while medium-sized and small-sized fell 69.8 percent and 57 percent, respectively.

The sales of excavators often correlate with active construction projects. Compared to 2021, excavator production fell 14.5 percent in the first quarter and 30.5 percent for the first five months.

Meanwhile, production and sales of commercial vehicles fell 39.4 percent and 41.9 percent year-on-year in the first five months, with May’s output and sales falling by 47.0 percent and 50.5 percent, respectively.

The production and sales decline of commercial vehicles in China has far outpaced that of passenger cars, according to CCMA.