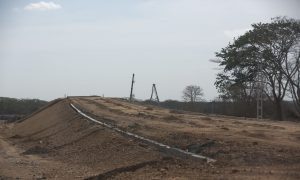 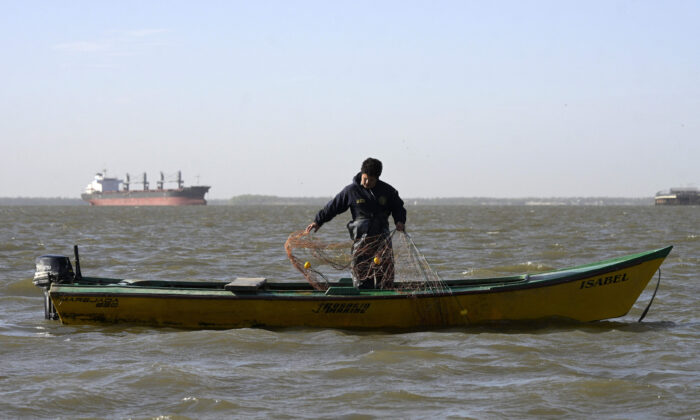 An artisanal fisherman lifts his 200 metre-long fishing net on the Parana River, off the coast of Rosario, Santa Fe, Argentina, on Aug. 23, 2021. (Juan Mabromata/AFP via Getty Images)
International Relations

Hundreds of Chinese fishing vessels fill the seas near the maritime borders of South American countries. While appearing modest, the fleet of small fishing vessels is among an armada of ships financially supported by the Chinese regime, with a portion potentially involved in illegally fishing other nation’s territorial waters.

Off the coast of Argentina, some of these ships are reported to turn off their mandatory tracking devices at night to fish illegally within other nations’ exclusive economic zones.

In the Southwest Atlantic, non-profit Oceana cited several incidents of Chinese vessels potentially carrying out illegal fishing. They were reported to have turned off their automated identification systems, which are mandatory under a U.N. treaty signed by China. The report tracked fleet activity along the waters of Argentina, from Jan. 1, 2018, to April 25, 2021.

Oceana documented over 6,000 gap events, during which vessels were invisible for more than 24 hours, “hiding fishing vessel locations and masking potentially illegal behavior, such as crossing into Argentina’s national waters to fish.” The ships were undetectable for 600,000 hours in total, and the Chinese fleet was responsible for 66 percent of those incidents.

Moreover, 523 boats were detected in the Southwest Atlantic, near Argentina, between November 2020 and May 2021. Of those, 42 percent “went dark” at least once, as they turned off their transponders.

Meanwhile, in the Southeast Pacific, a vigilante patrol called the Ocean Warrior recorded 16 cases of Chinese ships turning off their tracking devices, broadcasting multiple electronic IDs, and transmitting information that didn’t match listed names and locations. About 24 of the boats sailing in the area had a history of labor abuse accusations, illegal fishing convictions, or appeared to be in violation of maritime law.

China’s overseas fleet is the largest in the world, officially capped at 3,000 ships. However, it is reported to have between 200,000 and 800,000 boats, according to Ian Urbina, director of journalism non-profit the Outlaw Ocean Project. The fleet receives billions in subsidies from the Chinese Communist Party (CCP).

Urbina states that the fleet is “primarily fueled” by the CCP, adding that China’s fishing fleet “acts as a projection of geopolitical power on the world’s oceans.”

He further cites Greg Poling, director of the Asia Maritime Transparency Initiative, saying that “the scale and aggressiveness of its fleet puts China in control,” and that foreign countries are not willing to fight back Chinese fishing ships that enter their waters.

Urbina said that in 2018, the Chinese regime awarded its fisheries subsidies of $7.2 billion, which includes money for fuel, new boats, engines. This amounts to roughly 20 percent of estimated global subsidies in the industry.

Chinese company Pingtan Marine and its affiliates, which deploys China’s second-largest overseas fleet and is listed on the Nasdaq, was allegedly built on state loans, subsidies, and its CEO Zhou Xinrong’s connections within the CCP, reported AP.

For example, Pingtan received $29 million in subsidies in the first nine months of 2020 and $280 million in loans from the China Development Bank and other state lenders, as reported in its last earnings report.

The company has 57 ships registered by China to fish in the South Pacific, and has been accused of illegal fishing in Indonesia, Ecuador, and South Africa, as was reported by AP.

China’s exploitation of areas further and further from their shores comes after decades of overfishing near home. This constitutes a major problem for South America, as industrial Chinese fishing may pose a threat to local fishermen’s source of livelihood.

Chinese vessels usually remain on the high sea near the Americas—outside the countries’ maritime jurisdiction—while fishing for Humboldt squid.

China’s squid fishing in the Southeast Pacific high sea amounted to over 300,000 tons in 2019. By comparison, Peru’s catch during 2018 was 317,000 tons in its exclusive economic zone and 218 tons at high sea. The data was collected by the South Pacific Regional Fisheries Management Organization, an inter-governmental group committed to the conservation and sustainability of fishery resources.

Though squid is abundant in the area, experts caution the species may also suffer from overfishing, citing instances of stock disappearance in Argentina, Mexico, and Japan.

The region is vulnerable to abusive fishing from China, according to Captain Peter Hammarstedt, director of campaigns for Sea Shepherd, an activist organization for the conservation of marine fauna. He blames China for the plunder of tuna and shark in Asia, and claims there is no reason to believe they will “manage this new fishery responsibly.”

Hammarstedt also pointed out that the South Pacific Ocean is like the “Wild West,” as “nobody is responsible for enforcement out there.”

As the high seas have no regulations, non-profits are pushing for a High Seas Treaty, pursuing the creation of restrictions on fishing in international waters.

Recently, hundreds of Chinese ships were found fishing near the Galapagos Islands, a UNESCO world heritage site that is home to several endangered species. The finding spurred the deployment of a vigilante patrol called the Ocean Warrior in the South Pacific to keep track of fishing activity.