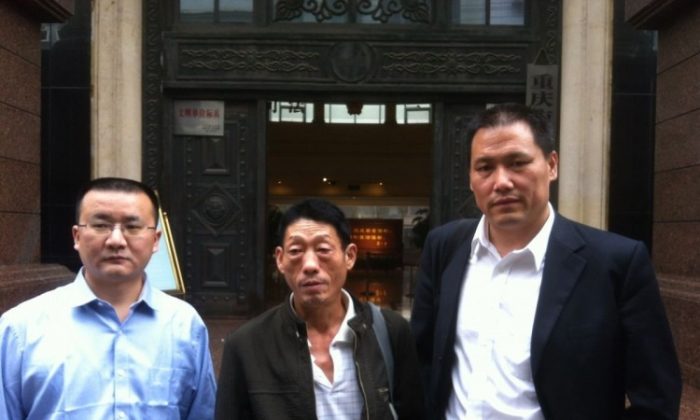 Ren Jianyu's father, Ren Shiliu (C), and defense lawyer Pu Zhiqiang (R). Oct. 10, 2012. Ren Jianyu, a low-level Chongqing official, was given a two-year labor camp sentence in August last year when Bo Xilai was still Party chief in the city. Ren was accused of "attacking" the government by posting comments on Sina Weibo. Now he has been granted an appeal hearing, and state media are speaking out on his behalf. (Weibo.com)
China

China’s state-run media recently proclaimed that Chinese citizens should be granted more freedom to criticize the government. The statements came in connection with the high-profile court appeal of a young Chongqing official who was sentenced to labor camp for posting messages critical of the government last year.

Some commentators say the appeal case and state media response provide clues how the regime will deal with the ousted official Bo Xilai.

Ren Jianyu, a 25-year-old former college student turned village official, in Pengshui County of Chongqing, was given a two-year re-education-through-labor sentence in August last year. He was accused of “attacking” the government by writing and reposting over 100 comments on Sina Weibo, considered of having a “negative” social impact, the regime’s mouthpiece Global Times said.

This was at a time when the now disgraced Bo Xilai was Party chief in Chongqing. The political climate is no longer the same in Chongqing, and Ren filed an appeal.

On Oct. 10, the No. 3 Chongqing People’s Court held a public appeal hearing for Ren. A shirt printed with the slogan, “Give me Liberty or Give me Death,” that Ren’s girlfriend helped him buy on the Internet, was used by the prosecutor as evidence of Ren’s guilt.

The appeal hearing gained unusual support from several state-controlled media during this sensitive period ahead of the 18th Party Congress.

Global Times, Beijing Daily, People’s Daily Online, and Beijing News criticized the two-year labor camp sentence as too heavy and advocated that people be given more freedom to criticize the government.

“Many [citizens] have voiced their support for Ren and are optimistic that he will obtain justice. It’s worrying that people can still be punished for expressing or writing critical thoughts in modern China,” a commentary by Global Times said.

“Being sentenced for negative expressions was a political tradition that prevailed in some countries before the 20th century. It’s outdated and goes against today’s freedom of speech and rule of law,” the article said.

Reading between the lines, political commentators come away with clues about the upcoming Bo Xilai trial and sentencing, as these are a high priority for the Party and are expected to take place before the congress.

Zhang Sutian, a current affairs commentator outside China, told The Epoch Times that current Party leader Hu Jintao and next presumptive Party head Xi Jinping have now secured control of the military, political power, and of major and small Party media. Hence out of political needs, these Party mouthpieces voiced condemnation of disgraced former Party chief Bo Xilai and his supporters, thereby creating a foundation for public opinion to bring down Bo.

Pu said that many Chinese are outraged about the forced labor system, and consider it a disgrace to the establishment of rule of law, and this is why Chinese authorities and media demonstrated tolerance for this issue. But from a political perspective, it’s about how the authorities have abused the labor system during Bo’s term in office, carrying out measures that were violating human rights and initiating a campaign to revive the Cultural Revolution, Pu said.

He added: “And now the current leaders are using this opportunity to purge Bo’s cronies in Chongqing.”

UPDATE: The BBC reported on Nov. 19 that Ren Jianyu was released.