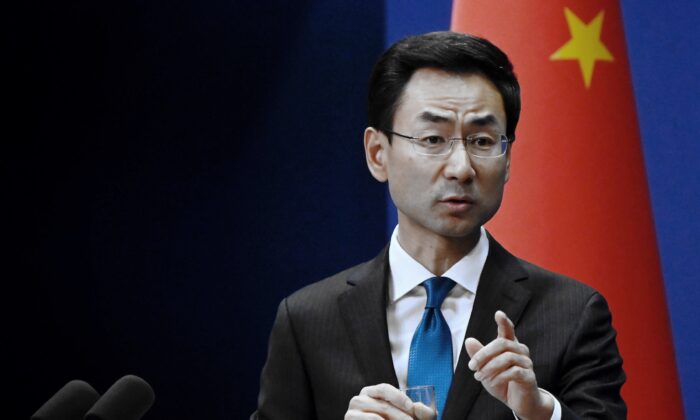 China's Ministry of Foreign Affairs spokesman Geng Shuang answers a question during a briefing in Beijing on November 28, 2019. (WANG ZHAO/AFP via Getty Images)
By Nicole Hao

The reports emphasize Iran’s stated desire to retaliate against the United States for the attack, quoting extensively from the Iranian regime’s official media and its officials, but they fail to include comments from the U.S. administration.

Some state media editorials veered toward encouraging a conflict between Iran and the United States.

China is one of Iran’s key allies. It was Iran’s largest buyer of crude oil before the United States imposed sanctions on Iranian oil last year.

None of the Chinese media reports mentioned that Soleimani has been blamed for the deaths of civilians and American soldiers while serving as head of the Quds Force. The military force is part of the Islamic Revolutionary Guard Corps, which the United States designated as a terrorist group in 2019.

Consistent with the Chinese regime’s propaganda, Geng claimed that Beijing was a mediator of peace in the Middle East.

The headline was a translation of a tweet by Iran’s semi-official Fars News Agency: “Iran said it has prepared 13 measures to seek revenge on the United States. Even the weakest one is enough to create a historical nightmare for the U.S.”

The above media outlets published dozens of articles in the past few days, all critical of the United States for conducting the airstrike. Most of them quoted Iranian officials, such as Iranian president Hassan Rouhani. None of the articles reported statements from U.S. officials or NATO, which called on Iran to “refrain from further violence and provocations.”

In a Jan. 5 article, Xinhua reported that Wang Yi, China’s foreign affairs minister, called his Iranian counterpart Zarif and told him that the United States’ killing of Soleimani exacerbated tensions and unrest in the Middle East.

Meanwhile, Hu Xijin, chief editor of the Global Times, suggested on Twitter that the U.S. attack would encourage North Korea to hold onto its nuclear weapons more tightly: “The US humiliating Iran this way sent such a message to North Korea: If it were not for your nuclear weapons, we would be more brutal on [sic] you. Now North Koreans are probably thinking: We can lose anything, but not nuclear weapons.”

In another tweet, he suggested that an all-out war was imminent. “Perhaps the war is not really far from u.s.. Now whether it’s Iran or forces trying to pass off as Iran’s, attacking US target will trigger even fiercer attack from the US. So forces that hate the US or hate Iran are all likely to be tempted.”

The Chinese regime is one of Iran’s top economic and military partners.

And China continued to import Iranian crude oil despite a U.S. sanctions waiver that ended in June 2019.

The Chinese regime has also made considerable investments in Iran in the past few decades. Tehran’s metro system, a large portion of Iran’s highways, and Iran’s gas refinement and oil infrastructure were built by Chinese companies. In 2018, Chinese state-owned CITIC Group established a $10 billion credit line to Iran. The state-run China Development Bank also promised $15 billion to Iran that year.

On Jan. 8, after Iran fired more than a dozen missiles at a U.S. military base in Iraq, stock prices of almost all 180 Chinese weapon manufacturers—mostly listed on Chinese exchanges— increased. Stock prices for Lingyun, a subsidiary of China’s largest military manufacturer China North Industries Group Corporation, increased more than 10 percent.

There is currently an international arms embargo on Iran due to expire at the end of the year, but the investor confidence indicated strong interest in Iran–China trade.

At a daily news briefing, Geng was asked by a reporter whether the stock price increase was due to China’s “defense” contributions to the Middle East region. He refused to answer the question.

“Some CCP officials really want the U.S. to fight with Iran. Then, the Chinese regime would have another five to ten years to strengthen its power without the U.S. noticing,” Wang Youqun, U.S.-based China affairs commentator wrote in the Chinese-language Epoch Times on Jan. 7.

But he predicted the Chinese regime ultimately would not want to become involved in a U.S.-Iran conflict.

“CCP needs the crude oil from Iran and Iran’s enemy country Saudi Arabia,” Wang said. He explained that if the United States and Iran entered into a conflict, the latter would not be able to export oil. Meanwhile, Saudi Arabia would be upset if the CCP supports Iran in the conflict.

Joseph Bosco, a U.S. national security consultant, told Epoch Times affiliate NTD that the Beijing regime is likely using the issue of Iran to divert Washington’s attention from its own threats to U.S. society. If the Chinese regime succeeds in fomenting a conflict between the two countries, that would also split up American resources devoted to tackling China’s threats.

“They [Beijing and Tehran] are starting to cooperate militarily and present a security threat to the U.S. in the region and elsewhere in the world,” Bosco said.