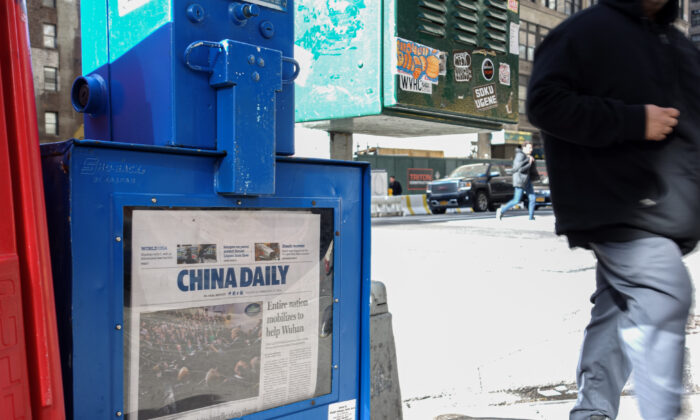 The communist Chinese are always ready to exploit and exacerbate the agonies of others for monetary and political gain. This is particularly true of their main enemy, the United States of America, which the communists seek to displace as the world’s only economic and military superpower.

Exploiting the apparently widening political divide in America is made to order for communist Chinese propagandists, “wolf warrior diplomats,” and other garden-variety communist apparatchiks and fellow travelers.

Let us examine the topic.

All of Xi Jinping’s grandiose schemes since he was installed as the CCP leader in 2012 have communist Chinese supremacy über alles as their end goals: Belt and Road Initiative, Maritime Silk Road, Arctic Silk Road, Health Silk Road, Global Development Initiative, Global Security Initiative, Digital China, etc. It is difficult to keep track of all of them, and these are just the ones with names!

Many other nameless initiatives are part of the ongoing hybrid warfare conducted by the CCP against the United States. A small sampling includes the following: leveraging COVID-19 to expand Chinese influence and economic growth; keeping Western money flowing into China; making Shanghai the world’s top global financial center; promoting global use of the yuan while displacing the dollar as the world’s reserve currency; becoming the world’s leading high-tech manufacturer; leading the world in next-generation advanced technologies; controlling all international technology standards; reshaping global governance under CCP leadership, preparing the rest of the world for the CCP’s fangkong (prevent and control) regimen; fully implementing and exporting the CCP’s social credit system; extending the jurisdiction of the national security law worldwide; taking the Chinese civil code worldwide; dominating the world’s oceans; and conquering space. There are many others.

As developed by Mao Zedong and modified and expanded over the decades, the key elements of the CCP hybrid political war against the United States (and the world) revolve around the Three Warfares or sānzhǒng zhàn fǎ (三種戰法): public opinion warfare (yúlùn zhàn–舆论战), legal warfare (fǎlǜ zhàn—法律战), and psychological warfare (xīnlǐ zhàn—心理战). Regarding public opinion warfare, Chinese state-run media are prolific and always at work conveying the Party line to domestic and foreign audiences to influence decision-makers, in particular, to support CCP objectives and undermine any anti-CCP narratives around the world.

On the legal warfare front, the CCP has been working to undermine and control international institutions while developing a Chinese legal framework around its civil code and the national security law (as controlled through an extensive social credit system) that it seeks to export to other nations for the purposes of exerting total Chinese control over world affairs.

The CCP’s psychological warfare efforts are subtle, insidious, ubiquitous, and undergird the other two warfares through various attempts to demoralize adversaries and make them receptive to CCP “solutions.” All elements of the Chinese communist state are involved and carefully synchronized to the best effect, including the propaganda and international communication departments of the Central Committee of the CCP, the ministries of foreign affairs and state security, the United Front Work Department (domestic and overseas), and the Chinese Communist Youth League. The tight synchronization ensures that the narrative is consistent and mutually reinforced by all public-facing CCP entities.

And what better way to demoralize one’s adversary than to exacerbate inherent political divisions, especially when one’s adversary is a diverse constitutional republic whose founding documents guaranteed the right of free political speech to all citizens?

President Joe Biden’s divisive address to the nation on Sept. 1 was made to order for communist Chinese psychological warfare operations. The speech was yet another gift to Beijing from Biden. Some 52.3 percent of Americans polled by the Trafalgar Group back in April responded that it is very likely that “President Biden is conflicted/compromised when dealing with China due to the Biden family’s personal business dealings in China.”

These Biden statements from that speech were expressly intended to divide, agitate, and stimulate confrontations and conflicts among Americans:

This is a continuation of the CCP’s efforts to disparage America’s democratic republic while claiming that the CCP’s crackpot “whole people’s process democracy” is the much better version. What the communists don’t understand (or ignore) is that vocal divisions in the American body politic are healthy signs of a vibrant democracy, provided none of those voices are squelched or prevented from speaking. And that vibrancy is completely absent in communist China.

From the article: “The two sides [Biden versus Trump supporters] have completely abandoned the voters that support their opponents, and wish to make the partisan struggle between legitimate political parties into a ‘confrontation between ourselves and the enemies.'”

On the contrary, Trump’s supporters have made it a point to welcome dissenting democrats into the America First movement. If anything, the Biden democrats conform to the China Daily view. And why wouldn’t they, as today’s Democratic Party is filled with people who admire the authoritarian rule of the CCP and its ability to quash all dissent?

Other phrases from the article include: “the tragedy of U.S. democracy,” “the fairytale of democracy that the U.S. is trying to sell worldwide,” “the disunited states of America,” and “the internal struggles [that] will also weaken U.S. national strength and decision-making.”

Once again, these are continuing CCP attacks and sloganeering against U.S. democracy meant to demoralize and divide. Still, that last phrase is particularly rich, as the crocodile tears shed by China Daily (speaking for the CCP) about a supposed weakening of U.S. national strength masks its cheering behind closed doors, as that U.S. weakening is precisely what the CCP seeks.

The article’s conclusion quotes a Chinese expert on U.S. studies (an oxymoron if there ever was one) at the Chinese Academy of Social Sciences in Beijing: “More and more countries around the globe are aware of the trend of polarization in the U.S. … It’s too risky to follow a country with great uncertainties and inconsistencies. The U.S. has to admit that it’s unqualified to be the role model or even the leader of the world.”

One can almost hear the applause of the Central Committee of the CCP as this conclusion was read aloud to them: “Mission accomplished! This is exactly what we have been telling the world for years now!”

Yes, that fictitious but entirely possible quotation from the Central Committee is correct in that communist Chinese political and psychological warfare against the United States has been relentless for decades. But it is also blatant propaganda aimed at sowing demoralization and division to bolster the CCP’s selfish goals and objectives and should be recognized as such by all objective observers.