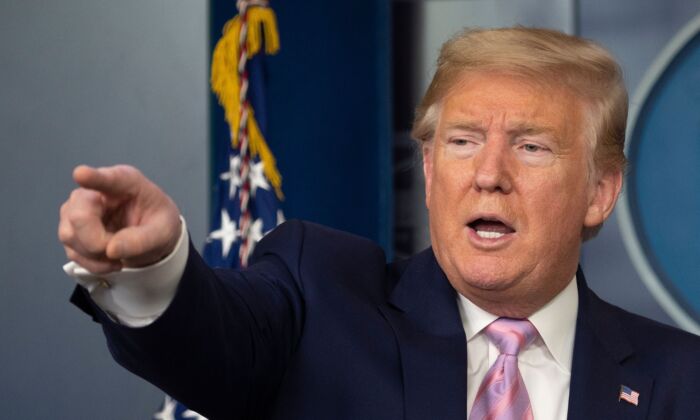 President Donald Trump speaks during the daily briefing on the CCP virus at the White House in Washington on April 4, 2020. (Jim Watson/AFP via Getty Images)
By Nicole Hao

Chinese state media have recently changed tactics, shifting from touting the Chinese regime’s efforts in containing the epidemic, to criticizing the U.S. government’s response to its outbreak.

In recent days, some articles have directly attacked the White House.

“The slow reaction of the U.S. government is the key” to the current outbreak, state-run media The Paper said in an April 4 report. “The optimistic predictions made by Trump was fundamentally out of touch with reality, which caused the outbreak to worsen.”

Chinese state-run newspaper Global Times ran a report on March 26 about the situation in New York, the epicenter of the United States’ outbreak.

The report quoted Dr. Colleen Smith, a doctor at the Elmhurst Hospital in New York City, who spoke to the New York Times: “From the president to the head of Health and Hospitals [the operator of New York City’s public hospitals], saying things like: ‘We’re going to be fine.’ And from our perspective, everything is not fine.”

The report went on to say that the Elmhurst Hospital “doesn’t have equipment, hospital beds…It’s shocking and like something that can happen in a third-world country.”

The report criticized the American government for not taking enough action and telling citizens the truth.

But in the New York Times article where Smith is featured, she did not criticize U.S. authorities. Her comments focused on the dire situation at her workplace, saying that the hospital did not have enough materials and equipment to treat patients and protect medical staff.

Another state-run newspaper Changchun Evening News then reported on March 28: “New York doctors revealed the truth. Trump cheated everybody and the whole of America is now experiencing the end of the world.”

Many Chinese reporters recently shared on their social media accounts a Chinese-language news report about American singer P!nk’s post on Instagram, where she said she and her three-year-old son were diagnosed with the CCP virus, commonly known as the novel coronavirus.

She also criticized the U.S. administration in her post: “It is an absolute travesty and failure of our government to not make testing more widely accessible.”

The report then went on to claim that people are mobilizing to nominate Cuomo to run in the upcoming presidential election. Cuomo has in fact publicly said he has no desire to run for president.

Tang Jingyuan, U.S.-based China affairs commentator told The Epoch Times that the Chinese regime intentionally prints this kind of rhetoric in order to deflect attention from its mishandling of the outbreak in China.

“The Chinese Communist Party (CCP) lost part of the Chinese people’s support because these people know that the outbreak was caused by its coverup. The regime is also afraid of the social turmoil because many people lost their jobs”—due to business activities being halted as part of quarantine measures, Tang said.

By stigmatizing the United States and President Donald Trump, “this can deflect the Chinese people’s anger toward the regime. This is CCP’s purpose,” he said.