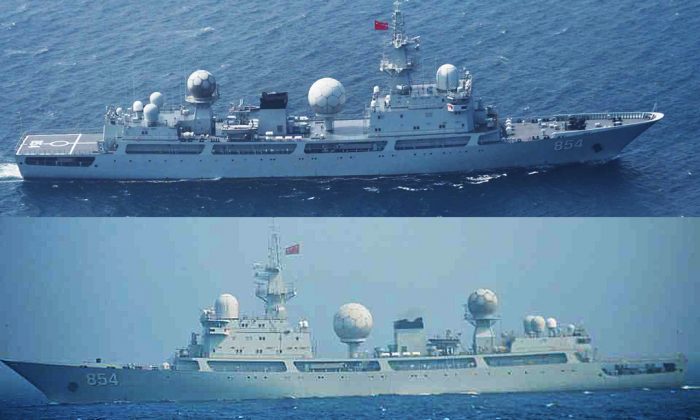 The Tianlangxing, a Chinese People’s Liberation Army-Navy Type 815 Dongdiao-class auxiliary general intelligence ship, passed through the Tsugaru Strait off the coast of Japan on July 2, and stayed off the Alaskan coast during the July 11th test of a U.S. missile defence system. (Courtesy Japanese Ministry of Defence)
China

The Chinese spy ship that sailed international waters off the coast of Alaska during a recent missile defense test was a class that had never been seen before in Northern Command’s area-of-responsibility, a spokesperson said Friday.

It was the first Chinese military vessel in the area since 2015 when a Chinese “surface action group” transited through, said Michael Kucharek, a spokesperson for North American Aerospace Defense Command (NORAD) and U.S. Northern Command.

Kucharek would not speculate as to what the ship was doing in the area, but mentioned several times that it was in international waters where it had the right of free navigation.

A military source familiar with the incident told The Epoch Times it was the same ship as reported by the Diplomat on July 4th, a Chinese People’s Liberation Army-Navy Type 815 Dongdiao-class auxiliary general intelligence (AGI) vessel.

Chinese state-owned media, the English language China Daily, reported on the ship in January in an article based on a report from a People’s Liberation Army (PLA) news outlet. The report focused on a newly commissioned ship, the Kaiyangxing.

The ship that was present for the missile test was the Tianlangxing, which passed through the Tsugaru Strait off the coast of Japan on July 2, according to the Japanese Ministry of Defense.

According to the PLA report cited by the China Daily, the PLA Navy now operates six electronic reconnaissance vessels. The report also gave specific information about the ships such as their capabilities and functions.

“Until now, the PLA Navy has never made public so many details about its intelligence collection ships,” said the report.

The newly launched Kaiyangxing was capable of conducting all-weather, round-the-clock reconnaissance on multiple and different targets,” the China Daily reported.

“The ship is so sophisticated that only a few countries, such as the United States and Russia, are capable of developing it,” it continued.

The China Daily quoted an unnamed source in the shipbuilding industry saying that the United States had 15 such ships.

The Tianlangxing arrived off the coast of Alaska shortly before the July 11 test of the Terminal High Altitude Area Defense (THAAD) system against an intermediate-range ballistic missile.

A spokesperson for the Missile Defense Agency told The Epoch Times it was the fastest target the system has been tested against so far.

The ship stayed approximately 100 miles off the Alaskan coast.

The THAAD system is designed to protect against intermediate- and short-range ballistic missiles, like those North Korea has amassed and threatened to launch against Japan and South Korea.

China’s ruling Communist Party, which has a faction that is close to the North Korean regime, has denounced the THAAD system that is now partially deployed in South Korea.

Speaking at an emergency meeting of the UN Security Council on July 5, the day after North Korea successfully tested an intercontinental ballistic missile that experts say could reach Alaska, representatives of China and Russia both called for the system to be dismantled.