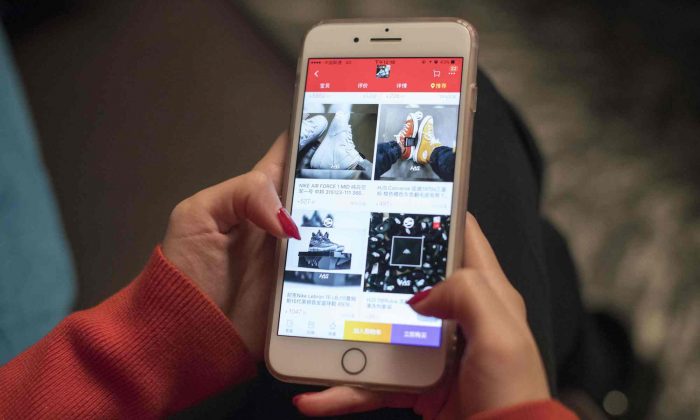 A woman browses her smartphone in her office lounge in Beijing on Dec. 5, 2017. (Nicolas Asfouri/AFP/Getty Images)
Social Issues

China’s embrace of advanced technology such as facial recognition, artificial intelligence, and smartphone mobile payments has already led observers to worry about the potential for mass surveillance and monitoring. These technologies are nearly ubiquitous in major cities around the country.

However, Chinese netizens have begun to grow concerned over invasion of privacy via smartphone apps.

On Jan. 3, a user with the handle “passerby on the internet” posted on Weibo, China’s equivalent to Twitter, about a recent incident. He was chatting with his wife about picking strawberries on New Year’s Day. The following day, when he opened a popular news aggregator app, called Jinri Toutiao, on his smartphone, he saw articles related to strawberries.

The app, which is the most downloaded in China, uses artificial intelligence to analyze users’ social media interactions and the content users consume, in order to generate a tailored news feed for each user. Over 100 million users actively using the app daily, with about 700 million total registered users, according to the company.

The day after chatting with his wife about picking strawberries, the user saw articles related to strawberries when he opened a popular news aggregator app, Jinri Toutiao, on his smartphone.

Since he did not search for any related content to strawberries, the incident made him suspect that the app had used his phone’s microphone to listen in on his conversation.

His post was re-posted over a thousand times within a short period of time. Soon, Jinri Toutiao responded with a statement on Weibo, saying that it does not collect data without users’ knowledge, and that a user must first give permission to allow the app to access the microphone—such as when a user opens the app’s video feature.

Many netizens did not buy the explanation though, chiming in with their own personal accounts of how the app recommends content about subjects they mentioned in real life.

On a Chinese online forum called Newsmth.net, other netizens wrote about similar experiences.

Advanced technology has already been employed for surveillance via the “Skynet” security camera system, which combines artificial intelligence with facial recognition technology to gather personal information on passersby who are captured, in real time. There are currently 20 million cameras on the streets and the Chinese regime plans to cover the entire country by 2020.

Now smartphone apps seem to be used for invasion of privacy.

On Jan. 3, a netizen discovered that when viewing transactions on the Alipay mobile payment app, there was a line in fine print: “I agree to Zhima services agreement,” with the box already checked. Zhima Credit is a credit agency developed by Ant Financial, which also operates Alipay. Alipay had to apologize in a statement.

In 2016, the New York Times reported that preinstalled software developed by the Shanghai Adups Technology Company—which were running on 700 million smartphones, cars, and other smart devices—had transmitted the full contents of text messages, contact lists, call logs, location information, and other data to a Chinese server.

Adups had designed the software at the request of a Chinese phone manufacturer in order to monitor users, according to the Times report, which noted that the software ran on some American Android phones manufactured by BLU Products.

Adups did not name the manufacturer, but on the company’s website, it said it provides software to ZTE and Huawei, China’s largest smartphone manufacturers.

Li Muyang contributed to this report.