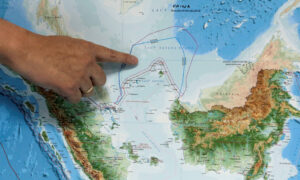 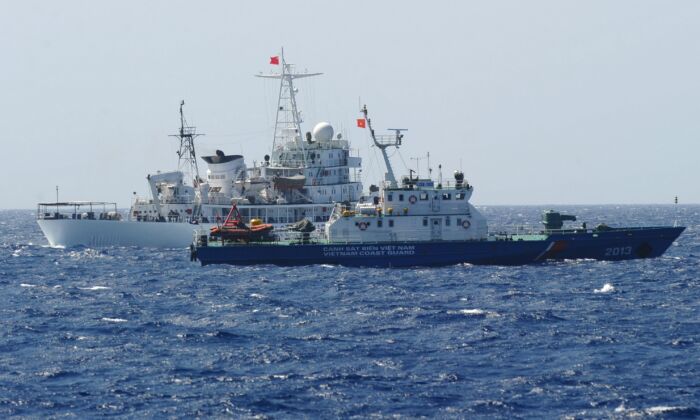 A Chinese coast guard ship (back) sails next to a Vietnamese coast guard vessel (front) near China's oil drilling rig in disputed waters in the South China Sea on May 14, 2014. (Hoang Dinh Nam/AFP via Getty Images）
Asia & Pacific

HANOI—A Chinese ship embroiled in a standoff with Vietnamese vessels last year has returned to waters near Vietnam as the United States accused China of pushing its presence in the South China Sea while other claimants are pre-occupied with the CCP virus.

On April 14, the ship, which is used for offshore seismic surveys, appeared again 98 miles off Vietnam’s coast, within its exclusive economic zone (EEZ), flanked by at least one China Coast Guard vessel, according to data from Marine Traffic, a website that tracks shipping.

At least three Vietnamese vessels were moving with the Chinese ship, according to data issued by the Marine Traffic site.

The presence of the Haiyang Dizhi 8 in Vietnam’s EEZ comes towards the scheduled end of a 15-day nationwide lockdown in Vietnam aimed at curbing the spread of the CCP (Chinese Communist Party) virus, commonly known as the novel coronavirus.

It also follows the sinking of a Vietnamese fishing boat near islands in the disputed waters this month, an act that drew a protest from Vietnam and accusations that China had violated its sovereignty and threatened the lives of its fishermen.

The United States, which last month sent an aircraft carrier to the central Vietnamese port of Danang, said it was “seriously concerned” about China’s reported sinking of the vessel.

“We call on the PRC to remain focused on supporting international efforts to combat the global pandemic, and to stop exploiting the distraction or vulnerability of other states to expand its unlawful claims in the South China Sea,” the U.S. State Department said in a statement, referring to China.

The Philippines, which also has disputed claims in the South China Sea, has raised its concerns too.

On Saturday, China’s Global Times, published by the official People’s Daily newspaper of China’s ruling Communist Party, said Vietnam had used the fishing boat incident to distract from its “ineptitude” in handling the CCP virus.

Vietnam’s Ministry of Foreign Affairs did not immediately respond to a request from Reuters for comment.

Helped by a mass quarantine and aggressive contact-tracing, Vietnam has recorded 265 cases of the CCP virus and no deaths. Nearly 122,000 CCP virus tests have been carried out in Vietnam.

China and Vietnam have for years been at loggerheads over the potentially energy-rich waters, called the East Sea by Vietnam.

China’s U-shaped “nine-dash line” on its maps marks a vast expanse of the waters that it claims, including large parts of Vietnam’s continental shelf where it has awarded oil concessions. Malaysia and Brunei claim some of the waters that China claims to the south.

During the standoff last year, at least one China Coast Guard vessel spent weeks in waters close to an oil rig in a Vietnamese oil block, operated by Russia’s Rosneft, while the Haihyang Dizhi 8 conducted suspected oil exploration surveys in large expanses of Vietnam’s EEZ.

“The deployment of the vessel is Beijing’s move to once again baselessly assert its sovereignty in the South China Sea,” said Ha Hoang Hop, at the Singapore-based ISEAS-Yusof Ishak Institute.

“China is using the coronavirus distraction to increase its assertiveness in the South China Sea, at a time when the U.S. and Europe are struggling to cope with the new coronavirus.”

By Khanh Vu and James Pearson. Epoch times staff contributed to this report.