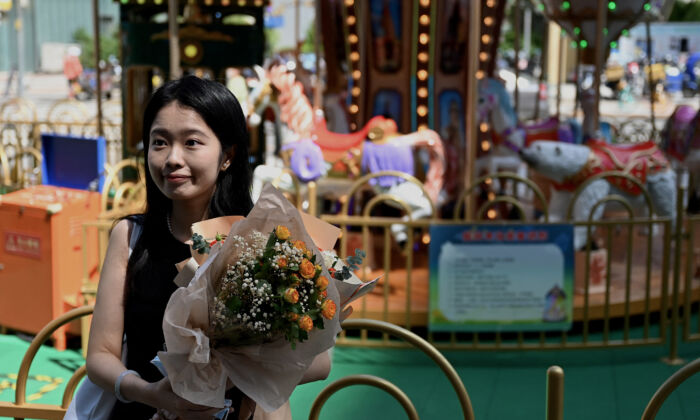 Zhou Xiaoxuan, also known as Xianzi, looks on as she arrives to attend a hearing in her sexual harassment case against prominent television host Zhu Jun at the Beijing No. 1 Intermediate People's Court in Beijing on August 10, 2022. (Noel Celis/AFP via Getty Images)
Social Issues

BEIJING—A Chinese woman who accused a well-known host on state broadcaster CCTV of sexual harassment said on Thursday she would seek a retrial, a day after having her case rejected at the appeal stage by a Beijing court.

Beijing-based screenwriter Zhou Xiaoxuan, 29, accused one of CCTV’s premier entertainment show hosts, Zhu Jun, of groping and forcibly kissing her in 2014 when she was an intern working for him, allegations he denies.

Zhou’s accusations, posted on social media in 2018, quickly went viral and she sued Zhu for damages that year. In September 2021, after two closed-door hearings, the Haidian People’s Court, a district court in the Chinese capital, rejected her claims due to insufficient evidence.

Zhou vowed to appeal and following a further closed-door trial, the Beijing Municipal No. 1 Intermediate People’s Court said late on Wednesday it rejected all of Zhou’s appeals and upheld the original judgement.

“The court held that the evidence submitted by the appellant Zhou was not sufficient to prove that Zhu had sexually harassed her, and that the appeal could not be substantiated,” the court said on its official Weibo account.

Speaking to Reuters on Thursday Zhou said she would probably apply for a retrial even though her chances of succeeding were “very slim.”

“We will talk to our lawyer and fight for a retrial,” Zhou told Reuters. “There may be basically no chance of re-starting it. But we also want to tell the justice system that we are making one last-ditch effort.”

Zhu did not respond to a Reuters request for comment on Wednesday’s court verdict. Zhou said he did not appear at any of the three hearings.

Police cordoned off the sidewalk outside the court building on Wednesday and told journalists not to film anything or gather, citing the COVID-19 pandemic.

In a video she posted online a day ahead of Wednesday’s hearing, Zhou said she has no regrets that she pursued her case.

“I really hope that people don’t have to suffer in the future,” she said. “I hope things will be easier for the next victim who enters legal procedures.”