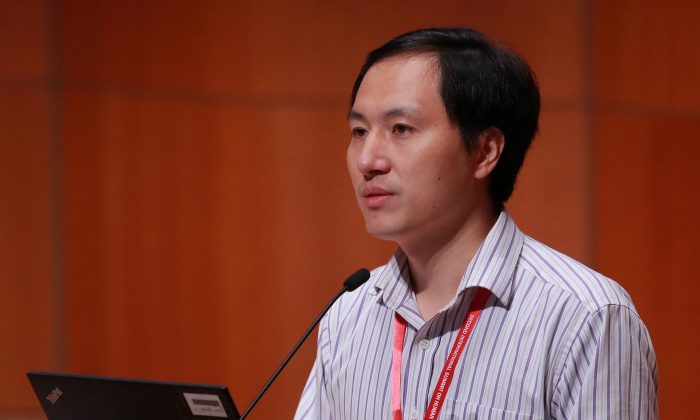 LONDON—A leading geneticist who ran the conference where a Chinese scientist said he had made the world’s first “gene-edited” babies condemned him on Jan. 7 for potentially jeopardizing lives and having no biology training.

Robin Lovell-Badge, organizer of the November 2018 event where China’s He Jiankui made his controversial presentation, described him as a rich man with a “huge ego” who “wanted to do something he thinks will change the world.”

He Jiankui, associate professor at Southern University of Science and Technology (SUST) in Shenzhen, China, sparked an international scientific and ethical row when he said he had used a technology known as CRISPR-Cas9 to alter the embryonic genes of twin girls born in November.

He could not be immediately reached to respond to Lovell-Badge’s comments. Chinese authorities are investigating him and have meanwhile halted this kind of research.

In videos posted online and at the conference, He said he believed his gene editing would help protect the girls from infection with HIV, the virus that causes AIDS.

Lovell-Badge, a professor and gene expert at Britain’s Francis Crick Institute who led the organizing committee for the November Human Genome Editing Summit at Hong Kong University, said it was impossible to know what He had actually done.

“If it’s true (that he edited the genomes in the way he says) then it is certainly possible that he has put the children’s lives at risk,” he told journalists in London.

“No-one knows what these mutations will do.”

Lovell-Badge said he originally invited He to the conference after hearing in scientific circles that he was “up to something.” Lovell-Badge hoped that asking He to interact with specialists would encourage him to “control his urges.”

“Pretty much everyone he talked to had said to him: ‘Don’t do it’,” he said. “But clearly it was all too late.”

Lovell-Badge said he learned of He’s claims on the eve of the conference, and had an emergency meeting with him.

“He thought that he was doing good, and that what he was doing was the next big thing,” Lovell-Badge said. But he had “no basic training in biology” and the experiments he said he had carried out “ignored all the norms of how you conduct any clinical trial or clinical experiment.”

“He should certainly be stopped from doing anything like this again,” he said.

Lovell-Badge said he had not heard from He since early December, but understood he was in Shenzhen in a guarded apartment during the probe.

Chinese authorities and institutions, as well as hundreds of international scientists, have condemned He and said any application of gene editing on human embryos for reproductive purposes was against the law and medical ethics of China.

Backed by the Chinese Regime

On Nov. 29, the CCP ordered a temporary halt to gene editing research.

He Jiankui was brought back to the university and is under house arrest on campus by the university’s president, Chen Shiyi, on Nov. 28, reported Hong Kong newspaper Ming Pao.

This gene editing technology was invented in the United States and is relatively uncomplicated to replicate. However, the international scientific community has strict protocols against its use on human subjects. Observers believe that this experiment could only happen under the environment of atheism and moral lawlessness created by the CCP.

Caoji, the online alias of a netizen who introduced himself as a former science professor at a university in Shanghai, wrote on Twitter on Nov. 30 that He’s “Gene-Editing Baby” experiment was promoted by high-ranking CCP officials. He’s university, SUST, was responsible for the project, and He carried it out in secret.

With hundreds of millions of yuan in funding at SUST, and given that He is a researcher associated with the CCP’s “Thousand Talents Plan,” Caoji believes that the experiment could not have occurred without state backing.

The “Thousand Talents Plan,” an ambitious initiative to attract foreign experts to China, is of particular concern for U.S. officials. Established by the Chinese communist regime in December 2008 to bring academics and researchers to China, the program has been described by the U.S. National Intelligence Council as a means of enabling technology transfer to China from the United States.

Caoji believes that He’s real mistake, in the eyes of the Party, is not that he violated research ethics, but that he “inadvertently leaked a state secret.”