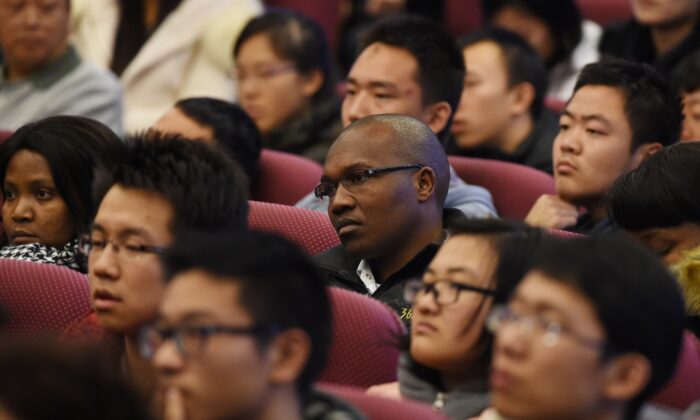 Chinese universities are leveraging education programs to promote Beijing’s foreign policy of Belt and Road, as well as Communist Party political ideologies, to students in southeast and central Asia.

The Epoch Times obtained a series of government documents wherein schools detailed their programming for foreign students in applications for central government funding.

The Chinese regime has announced some of these study abroad programs before, but did not provide much detail about the goals and curricula.

The Belt and Road Initiative (BRI), also known as One Belt, One Road, is Beijing’s policy of building infrastructure projects in parts of Asia, Africa, and Europe. Critics have said the projects place developing countries under massive debt and serve as economic pressure to influence governments into agreeing with Beijing’s agenda.

The Lancang-Mekong Cooperation is a BRI project between Cambodia, Laos, Burma, Thailand, Vietnam, and China. The project was first proposed by the Chinese regime in November 2014, to the Mekong river region (China calls it the Lancang river).

China has been accused of building dams and retaining water in this region to the detriment of downstream nations that need the water source for fishing and farming.

Yunnan Minzu University, located in southwestern China’s Kunming city, is one of the schools charged with spreading the CCP’s agenda.

In an early 2018 application to the Lancang-Mekong Cooperation Special Fund, a fund set up by China’s State Council to handle the BRI project, the university explained that the school intended to train “talented leaders” from the five participating countries and teach them “Chinese politics, economy, society, humanities, and so on.”

Textbooks would include titles such as  “Theory and Practice of Socialism with Chinese Characteristics” and “Research on the CCP’s Innovative Theory,” and the classes would cover topics like: “experiential inspection of the practical results of China’s reform, opening up, and modernization,” “research on the construction of a harmonious socialist society in China,” “China’s national conditions,” “China’s history,” “China’s foreign policy,” and so on.

The university applied for 7.42 million yuan ($1.13 million), which would cover all the costs of training 100 university students, 100 government officials, and 3,000 workers who would be recruited from the five countries participating in the Lancang-Mekong project.

For the same project, the Yunnan provincial education department also applied for a 4.95 million yuan ($760,000) budget for 2018, which would cover the costs of training 30 translators from each of the five countries for 30 days. The purpose was to train professional translators to interpret Chinese in those countries.

Lanzhou University in northwestern Gansu Province, meanwhile, operates an “Elite Plan” to recruit top university students and a “Seed Plan” to train young technicians from Central Asian countries that have joined BRI, such as Kazakhstan, Kyrgyzstan, and Uzbekistan, as well as some other Asian countries, suck as Mongolia and Afghanistan.

The two programs would teach students about the meaning of BRI and “community with shared future of mankind,” a concept devised by the CCP to promote its foreign policy.

In an application the university filed on June 18 this year to receive funding, the school wrote: “[The plans] can effectively broaden positive public opinion to support the BRI in these foreign countries, including eliminating voices of criticism and opposition.”

Northwest Normal University, a university that trains teachers, said in its report to the Gansu provincial education department on June 21 that its Chinese language classes meant to promote BRI to students from Central Asian countries, were successful.

“The United Front Work Department of the CCP Central Committee evaluated that the language classes serve the construction of the BRI and is an important model project to maintain our country’s stability and security,” the report stated.

The United Front is a Party organ that seeks to gather intelligence on, manage relations with, and influence elite individuals and organizations inside and outside China, in order to spread Beijing’s agenda.

The Yunnan Police College reported that it seeks to promote BRI through a police master’s degree. In a May 28 application, it proposed educating 56 foreign police officers from more than nine countries. China’s Ministry of Public Security, the agency that oversees the police force, would pay 4.95 million yuan (about $752,000) for the tuition and living expenses of these 56 police officers.