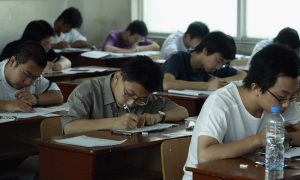 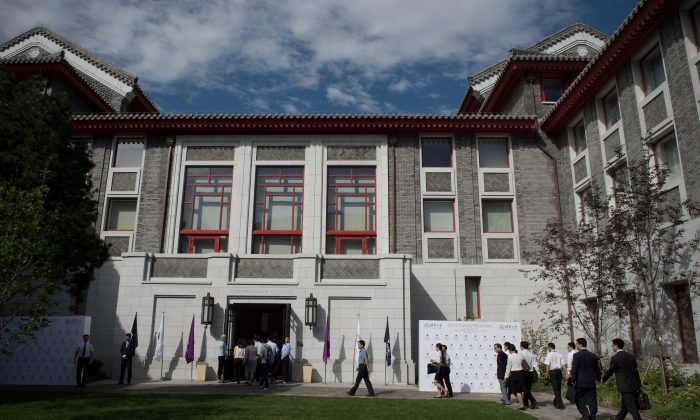 This picture taken on Sept. 10, 2016 shows a general view of the front entrance of the Schwarzman college at Tsinghua university in Beijing.
China Human Rights

Chinese academics are calling on China’s prestigious Tsinghua University to reinstate a law professor after he was suspended for criticizing the communist regime in a series of essays.

Xu Zhangrun, 56, a prominent constitutional law professor, is being investigated by the Beijing-based university, and has been stripped of his positions and suspended from teaching, the Financial Times reported on March 25.

“I think the reason [why Xu was suspended] is probably because of the series of articles he wrote in recent years,” wrote Guo Yuhua, a sociology professor at Tsinghua University, in her article on Chinese-language edition of the Financial Times on March 26.

In the last two years, Xu published several essays and delivered public speeches on the Chinese Communist Party (CCP), in which he criticized the party’s totalitarianism.

For instance, last July he published an article titled “Our Current Fears and Expectations” on the website of Unirule Institute of Economics, a private Chinese think-tank.

In the essay, Xu said that the basic principles legitimizing the CCP’s rule over last several decades are that it: maintains basic public security; allows people to pursue wealth; allows limited freedoms to the people; and maintains term limits on political positions.

The professor said that the party has failed to ensure these basic guarantees, pointing out abuses by the regime such as its expropriation of private property without just cause or compensation, its tightening of censorship, and its foreign policy which sees the regime pouring vast sums money into developing countries while more than 100 million Chinese people struggle to feed themselves.

Zhang Qianfan, constitutional law professor at Peking University, told Voice of America on March 26: “I’m sure that this [matter] is a ‘punishment because of speech’ case. Although Chinese scholars, especially sociologists, by now are already used to censoring themselves.”

Xu was suspended not because he aired any extremist views, but because “he spoke common sense that most people don’t dare to say in China’s severely restrictive environment,” Zhang wrote in an article published on Financial Times on March 27.

“When a university doesn’t know what it has lost after losing a real scholar, and is even glad to have rid itself of a ‘threat’—is it still a university?” Zhang wrote.

Gao Hongjun, a law professor at Tsinghua University, in a March 26 post on his Weibo account, China’s version of Twitter, said that Xu’s suspension was not supported by law, and has caused fear among the the staff.

“In a country ruled by law, freedom of speech is constitutional right granted to all citizens. It is also a basic human right. As a teacher, I protest the school’s handling of the matter,” Gao said in the post, which was deleted after a few hours.

The CCP’s control on speech has tightened in recent decades. In the last fews years, dozens of Chinese professors have been punished for expressing views undesirable to the communist regime.

Xu Chuanqing, an assistant professor at Beijing University of Civil Engineering and Architecture, was given an administrative penalty by the school last May after she made comments in class suggesting that Japan was superior than China because Japanese students study harder than Chinese ones.

Also in May 2018, Zhai Juhong, an assistant professor at Zhongnan University of Economics and Law, was fired and expelled from CCP after she criticized constitutional amendments abolishing the Chinese leader’s term limits.