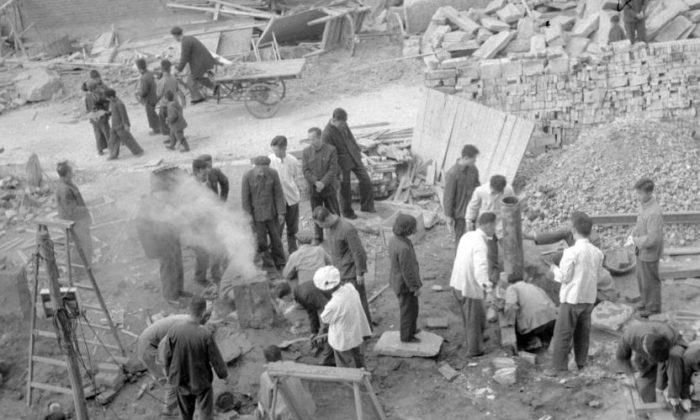 Employees of the Shin Chiao Hotel in Beijing build in the hotel courtyard (background) in October 1958 a small and rudimentary smelting steel furnace during the period of the "Great Leap Forward. (JACQUET-FRANCILLON/AFP/Getty Images)
China

The man known as the “Father of Hybrid Rice,” Yuan Longping, recently revealed in an interview with the Guangzhou Daily that as many as 40 million people died of starvation in the Chinese Communist Party’s (CCP) “Great Leap Forward” campaign in the late 1950’s.

During his interview Yuan went on to remark that the so-called “Three Years of Natural Disaster” in 1960, 1961 and 1962 talked about in Chinese textbooks is actually a direct result of the CCP’s rampant attempts to increase production quotas on crop output nationwide.

“It is not known to the young generations that during the Great Leap Forward people removed forests for steel factories and severely disrupted the ecological environment,” said Yuan in the Guangzhou Daily.

“The big drought in 1959 caused almost zero harvest and the terrible famine that followed claimed 40 to 50 million lives over the years. I personally witnessed five corpses along the roadside, some by the fields and some under the bridges. It was miserable beyond imagination.”

Yuan is a member of the Standing Committee of the CPPCC National Committee. Although scholars have stated the death count as a factual number in the past, this is the first time an official as high as the deputy provincial level has admitted it publicly.

Mao Zedong first introduced the so-called “Great Leap Forward” in 1958, attempting to “modernize” China in a few years by launching a mass steel production campaign. Because nearly everyone was involved in the campaign, farming was severely neglected.

Moreover, excessively zealous local officials who were afraid as being branded as “laggards” set unrealistically high harvest quotas. As a result of this, peasants had nothing left to eat after turning over the portions of their crops taken as taxes.

Yuan’s statement triggered heated discussion on Chinese Internet forums about parts of recent history that have been covered up in textbooks.