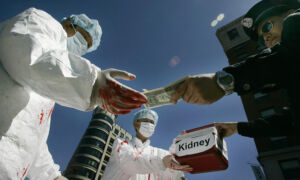 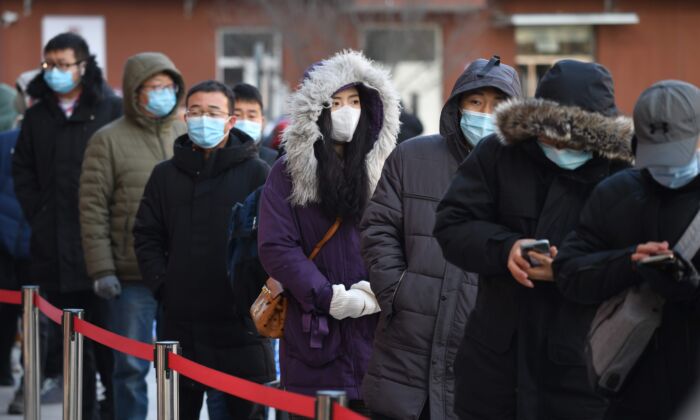 People line up to be tested for the COVID-19 outside a hospital in Beijing, China on Jan. 5, 2021. (GREG BAKER/AFP via Getty Images)
INSIDE CHINA

Chinese Residents Under Virus Lockdown Running out of Food, Supplies

The outbreaks in major cities of northern China such as Beijing, Dalian, and Shenyang remained severe, as residents were running out of food and other resources amid stringent lockdown measures.

Meanwhile, northern Hebei Province witnessed another surge in COVID-19 cases and struggled to contain the outbreak.

“We are like lambs to be slaughtered. There’s no way to save ourselves. We don’t know how long we will be locked inside,” Dalian resident Mr. Sheng said in a phone interview.

Sheng said local authorities didn’t assist residents who ran out of food. “Now the hottest product in Dalian is a large-sized freezer. Everyone is trying to stock up on a lot of food to deal with the lockdown,” he added.

The Hebei government announced on Tuesday that the whole province entered “wartime” status because at least 59 people were infected with the CCP virus since authorities announced the first case in the latest surge on Jan. 3.

During this pandemic, the central government has sent specialists to areas where the outbreak is out of control, suggesting that the Hebei outbreak was more severe than authorities reported.

Shijiazhuang, the capital of Hebei, then announced that the whole city would be fully locked down. Each neighborhood and village must make sure to self-isolate all residents.

In a video that circulated widely on social media, about one hundred people dressed in white-color protective suits were seen spraying disinfectant on the streets of Shijiazhuang.

The Shijiazhuang government didn’t mention how long this lockdown will last, nor details about how to supply residents with enough food.

According to the city’s statistics bureau, Shijiazhuang has 11.03 million residents as of the end of 2019.

The atmosphere remained tense in Shenyang city. On Jan. 4, a Shenyang resident shared a video with The Epoch Times, in which several military vehicles appeared on the streets. Some have “People’s Liberation Army CDC” painted on them, meaning they are military trucks for epidemic control.

Back in February 2020, military vehicles entered the city of Wuhan when the virus outbreak was at its peak and hospitals were overwhelmed with COVID-19 patients.

A restaurant owner in Huanggu district of Shenyang told the Chinese-language Epoch Times that his restaurant, along with all nearby stores, shops, and eateries, were forced to close down since late December last year. Authorities have not informed him of updates beyond the official announcements, he said.

One Shenyang resident shared a video showing his building’s fence, which was made of steel and had sharp blades protruding from the top.

Another local shared a video of a two-meter-high (about 6.56 feet) wire fence surrounding one residential complex.

Shenyang residents are still allowed to move about their residential compounds. But in Dalian, people can only stay within their apartment.

Some Dalian residents recorded videos of people shouting outside their apartment windows, pleading for food and basic necessities.

Mr. Xu lives in Benxi, a city between Shenyang and Dalian, and has friends living in both cities. He told the Chinese-language Epoch Times that Benxi authorities also issued restrictions, but people still can travel within the city.

His friends also informed him that they knew of people diagnosed with COVID-19 that authorities did not announce. Xu added that on WeChat, a popular social media platform, he and his friends were unable to post any content related to the outbreak.

Xu saw WeChat posts about people in Dalian and Shenyang not having enough food supplies to last through the lockdown.

“The worst scenario is if one family member contracts the virus, then the whole family will die of COVID-19 because all families are locked inside their homes,” Xu added.

In Beijing, some became stranded after authorities issued lockdowns.

A waitress who works at the Xinxi restaurant in Shunyi district told the Chinese-language Epoch Times that they were trapped inside their workplace for several days and not allowed to go home.

“Officials didn’t allow us to leave because the area is designated as a medium risk region to contract the virus,” the waitress said in a phone interview on Tuesday.

A resident of Xidulan village, also in Shunyi district, said some villagers became stranded at a construction site after the area was locked down. “All construction was banned, but these villagers aren’t allowed to come back. They are stranded out in the field,” said Zhou Hui (pseudonym) in a phone interview.