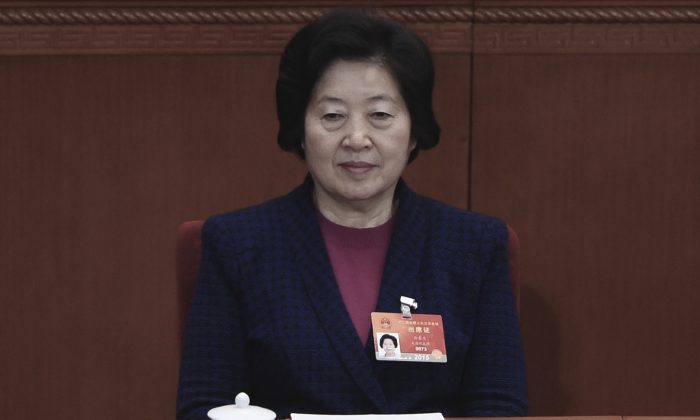 While the official was focused on touting a reported reduction in daily COVID-19 infections, local residents said her visit was just for show, as she didn’t address any of their hardships caused by the government’s lockdown policies. Instead, tighter restrictions relating to the official visit had made life even harder for them.

Since Nov. 12, residents have been living under strict lockdown, with no one being allowed to leave their homes. According to a notice, if any members of the household do leave, the quarantine period is reset to 14 days. Authorities have installed electronic door sensors and have stuck seals on doors to monitor for noncompliance. However, many households have run out of food and essential items due to the strict measures and the lack of lockdown services.

Mainland Chinese media reported that from Nov. 12 to Nov. 13, Sun traveled to Dalian, where the COVID-19 outbreak is severe, to conduct “research and guidance on epidemic prevention and control.” Netizens stated that upon Sun’s arrival, as part of the Chinese Communist Party’s (CCP’s) efforts to guide China’s “fight against the pandemic,” official reports of daily cases numbers showed a “turning point” and a “slowing down and controllable” situation.

According to official state media reports, during her inspection, Sun visited Dalian’s University Town, the companies and hotels that had reported infection clusters, and the nearby county-level city of Zhuanghe. On Nov. 14, Sun also stopped at a COVID-19 test site in an elementary school in Dalian and a residential community.

In a video posted from the residential community at Yiju Garden in Sunshine Yicheng, Ganjingzi District of Dalian, apartment residents in lockdown shouted to Sun from their homes.

“We have no food, and the price [of rationed food] is too expensive!” they reportedly told the vice premier.

Also on Nov. 14, local officials specially purchased some food and supplies for residents in Quanshui Street, Ganjingzi District of Dalian, at the time of Sun’s visit. But by Nov. 15, the purchased food and supplies still hadn’t been distributed after they were left unattended and many residents continued to go hungry.

400K families in Zhuanghe, Dalian City in #CCPChina are sealed inside their homes. Nobody is allowed to go out for 14 days (Nov. 11 to 25). If the seal is damaged, that family will be taken away, be centrally quarantined at their own expenses. pic.twitter.com/EmRToERZmS

A local resident in Zhuanghe, which has been hit hard by this round of the COVID-19 outbreak, told the Chinese language Epoch Times that the city is under a total lockdown and that Sun’s visit hasn’t been at all helpful to the local situation.

“The rationed food and the delivery are not free, and then the local businesses have been forced to close without any compensation, and we still have to pay for the loans,” a local business owner surnamed Lin told The Epoch Times. “The controls became stricter with Sun’s visit. Now, people are not allowed to leave their homes at all. All the stores are closed and sealed off, and people’s houses are also sealed. No business is allowed to open.

“Now, they’ve installed sensors at people’s doors. If you open the door, they [the local authorities] will know and come to arrest you. If you leave your home, you will be arrested. Anyway, I can’t run my business now. They won’t allow it. So, don’t think about ordering a cake in Zhuanghe in the near future, because no business is open to make it.

“Sun was only here to take a quick look. She arrived at noon and left before evening.”

Wu Cenxi contributed to the report.