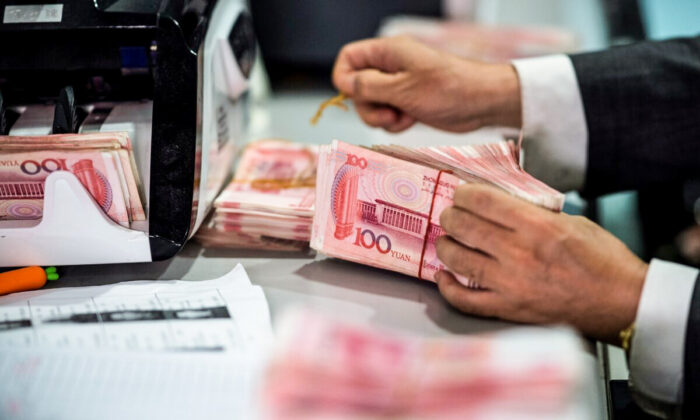 A bank employee counts out 100 yuan notes at a bank in Shanghai on Aug. 8, 2018. (Johannes Eisele/AFP via Getty Images)
Chinese Regime

China’s state outlet Economic Daily published a op-ed on Oct. 15, claiming that many private banks have recently been fined by regulatory authorities for “violations of laws and regulations.” The article criticized some private banks for blindly seeking large borrowers to lend a large amount of loans, which could have unintended consequences; lending to real estate projects in violation of regulations; and the largest shareholders excessively intervening in the operation and management of the banks.

The article states that the reasons why private banks have conducted business in violation of laws and regulations are “not only related to the inadequate supervision and the profit-seeking nature of private capital, but also related to some of the disadvantages of private banks.” However, the article also emphasizes that “disadvantages” is not an excuse for illegal operations. It states that private banks must adhere to a baseline of risk; ensure that systemic and regional financial risks do not occur; ensure the safe and efficient operation of the financial market and overall stability; and complement state-owned banks and joint-stock commercial banks.

The article warns that the relevant regime departments must be alert to the “barbaric growth” of some private banks to effectively prevent financial risks. It also urges departments to guide banks to return to their original purpose of serving weak links in the real economy, and conduct in-depth investigations into constraints of the development of private banks, and introduce more targeted solutions to gradually alleviate the obstacles of capital replenishment policy.

Law Ka-chung, a Hong Kong economist and former chief economist of the Hong Kong branch of the Bank of Communications, told Radio Free Asia (RFA) that the Chinese regime wants to target certain people and businesses, and hopes to reduce the risk of high leverage in real estate. But the current serious debt crisis has put the authorities in a dilemma and they dare not act rashly.

“The problem is that after the companies and banks go bankrupt, many people will lose their jobs, and it will affect other related businesses,” he said.

He Jiangbing, a Chinese economist, told RFA: “China has no private banks. They are all state-owned. A small number of them are the product of collusion between government and business. There are no real private banks in China. The country has the most control over banks.”