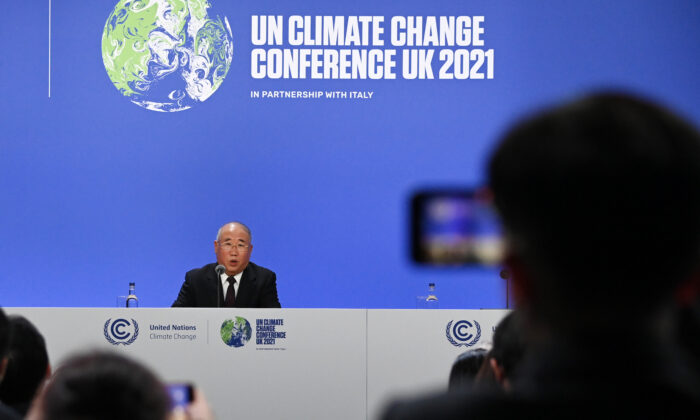 The Chinese Communist Party (CCP) has twisted the climate change movement into a political and economic weapon against the West, according to a new report by The Global Warming Policy Foundation, a London-based nonprofit.

Titled “China’s Energy Dream,” the report details the CCP’s manipulation of international climate agreements and comes to a startling conclusion: “China uses climate policy both as a way to strengthen its economy and as a weapon for weakening other countries.”

Ample evidence of this corruption was seen at the recent “COP 26” climate summit held in Glasgow, Scotland, according to the report’s author, Patricia Adams. At China’s insistence, an agreement to “phase out” the use of coal-burning power plants, was changed to “phase down”—allowing for Beijing’s continued use of coal for power. This last-minute change allowed COP26 delegates to celebrate a new climate deal that included China, the world’s largest greenhouse-gas polluter.

For China, it was a double victory, allowing the regime in Beijing to claim a commitment to a clean energy future without having to sacrifice its heavy dependence on the fossil fuels it needs to power its economy.

Adams, executive director of the Toronto-based nonprofit Probe International, has spent 30 years studying environmental problems in China and the CCP’s manipulation of the environmental movement. The title of her report is a play on the “Chinese Dream” slogan that Xi Jinping has used repeatedly since he became leader of the CCP in 2012. It’s a term used to capture the regime’s official aspirations—from sustainable development to international prestige.

“China’s Energy Dream” shows how heavily Xi’s dream depends on fossil fuels: “For the regime to survive, and that is surely the CCP’s top priority, fossil fuels for economic growth must be secure.” For this reason, the report explains, “the pursuit of CO2 reductions within China would serve nei­ther the goal of preserving Communist rule nor becoming the world’s foremost superpower by 2049.

“Carbon dioxide reductions only make sense for those it wishes to harm and supplant.”

“China is doing everything it can to encourage the West to continue its pursuit of climate reforms,” writes Adams, while the CCP only pretends to play along. As the United States and other advanced economies grapple with the challenges of a low-carbon economy, “China is going all out, domestically and internationally, to secure more and more fossil fuels to power its economy and achieve world superpower supremacy.”

In an interview with The Epoch Times, Adams was even more blunt.

“It is very clear to me that climate change has become a war weapon for the CCP. Their goal is to supplant Western governments while continuing to grow their economic and military power and achieve world supremacy.

Adams’s report reprises China’s history of subverting international institutions—from its violation of fair trade rules to its relentless cyber espionage and cyberwarfare attacks on foreign competitors. According to the author, there’s little reason to expect that China’s approach to climate policy will be different. The Chinese regime continues to expand its navy and build seaports and oil pipelines—all to strengthen its access to sources of fossil fuels.

How has the CCP managed to do so little about emissions without protest from the world’s environmentalists? As Adams sees it, China has co-opted and corrupted the international climate change movement.

“Like all western NGOs, green groups are only allowed to operate in China so long as they bite their tongues [about China’s problems],” she wrote in a paper published in 2020. To work with China, climate change organizations must “turn a blind eye to the obvious: China does not honor its international agreements and has no intention of reducing fossil fuel consumption.”

“While the world has awakened to China’s abuses, Western environmentalists are silent,” Adams said in a statement accompanying the 2020 paper. “China plays them as useful idiots” who can’t contradict Xi for fear of losing China’s participation in the global climate effort.

As Adams sees it, the climate change community benefits from the CCP’s charade.

“There are countless environmental groups and government agencies around the world whose budgets depend on this climate change issue,” she told The Epoch Times, “and they all need China to participate. Or at least appear to be participating.”

To observers such as Adams and the Global Warming Policy Foundation, it became clear long ago that not only was China unable to reduce emissions, it was headed in the opposite direction as its economy exploded and the need for power grew exponentially.

Despite a decade of public statements about clean energy, China remains the world’s largest user of coal and is building coal-burning power plants at a rate of one per week.

“In 2020, China built over three times as much new coal power capacity as all other countries in the world combined,” according to the Global Energy Monitor.

“China absolutely depends on fossil fuels,” Adams said. “They need it to run their economy.”

Whatever climate promises the CCP might make, it can’t and won’t be able to give up fossil fuels. Yet, the regime will continue to push the United States and other advanced economies to make those changes.

“Look at the direction we are headed,” Adams says about U.S. climate policy. While China continues to grow economically through its use of fossil fuels, the United States has “bans on fracking and new oil extraction, canceled pipelines, and unrealistic pushes for subsidized solar and wind power. These policies being encouraged by Western environmental groups threaten to destroy our economies.”

“China is involved in climate change to further its own goals. China has serious air and water pollution problems, but CO2 isn’t one of them. Climate policy doesn’t meet any of China’s internal environmental needs. It’s a powerful international issue that the CCP uses for its own benefit.”