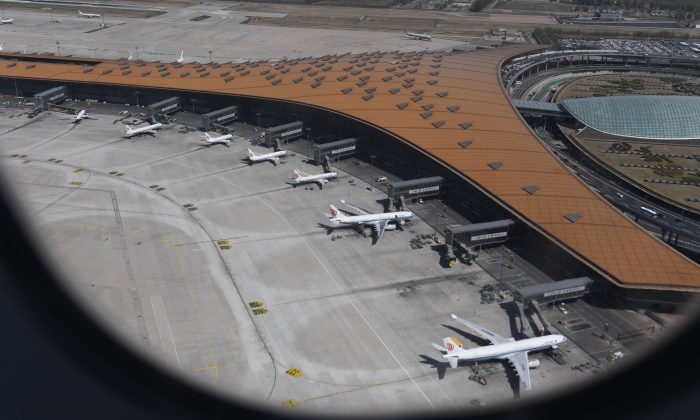 This aerial view taken through the window of a plane, shows various Airbus A330 and Boeing 737 planes of Air China parked at Beijing's capital airport on April 11, 2018. (Greg Baker/AFP/Getty Images)
China-US News

Amid an escalating fight over China‘s trade surplus with the United States, the White House said China‘s Civil Aviation Administration sent a letter to 36 foreign air carriers, including a number of U.S. carriers, demanding changes.

The carriers were told to remove references on their websites or in other material that suggests Taiwan, Hong Kong, and Macau are part of countries independent from China, U.S. and airline officials said.

Taiwan is China‘s most sensitive territorial issue. Beijing considers the self-ruled, democratic island a wayward province that it will eventually reunite with the mainland, whether by force or coercion. Hong Kong and Macau are former European colonies that are now part of China but run largely autonomously.

The White House said in a statement that President Donald Trump “will stand up for Americans resisting efforts by the Chinese Communist Party to impose Chinese political correctness on American companies and citizens.”

“This is Orwellian nonsense and part of a growing trend by the Chinese Communist Party to impose its political views on American citizens and private companies. … We call on China to stop threatening and coercing American carriers and citizens.”

On May 6, China‘s foreign ministry responded to the White House comments, arguing that overseas companies operating in China should respect its sovereignty and territorial integrity.

The Trump administration demanded a $200 billion cut in China‘s trade surplus with the United States by 2020, sharply lower tariffs, and a halt to subsidies for advanced technology, people familiar with the talks said.

“My group just got back from China. We’re going to have to rework China because that’s been a one-way street for decades,” Trump said at an event in Cleveland, Ohio on May 5.

“We can’t go on that way,” he said, although he also said he has a lot respect for Chinese leader Xi Jinping.

Trump earlier this week praised his relationship with Xi, but there were no signs of significant progress during a U.S. delegation’s visit to Beijing for trade talks on May 3 and 4, raising fears of a trade war between the world’s two largest economies.

China‘s top diplomat, Yang Jiechi, and U.S. Secretary of State Mike Pompeo on Saturday discussed bilateral ties by phone, with Yang saying relations were at “an important stage,” according to the Chinese foreign ministry.

It was unclear if the call came after, or was a response to, the White House statement, or if the two had even discussed the issue of how Taiwan, Hong Kong, and Macau are referred to by U.S. companies.

Trump has already proposed tariffs on $50 billion of Chinese goods which could go into effect next month.

China has imposed its own retaliatory tariffs on U.S. goods, including soybeans and aircraft, will go into effect if the U.S. duties are imposed.

The dispute over how airlines refer to Hong Kong, Taiwan, and Macau is another area of tension in U.S.-China relations.

A spokesman for Airlines for America, a trade group representing United Airlines, American Airlines, and other major carriers, said on May 5 that it was working with the U.S. government to determine “next steps” in the dispute.

In January, Delta Air Lines, following a demand from China over listing Taiwan and Tibet as countries on its website, apologized for making “an inadvertent error with no business or political intention,” and said it had taken steps to resolve the issue.

The apparent intensification of efforts to police how foreign businesses refer to Chinese-claimed territories—even if only in pull-down web menus—underscores how sensitive the issue of sovereignty has become in China.

China‘s aviation authority said in January it would require all foreign airlines operating routes to China to conduct comprehensive investigations of their websites, apps, and customer-related information and “strictly comply with China’s laws and regulations to prevent a similar thing from happening.”

Australia’s Qantas Airways said in January it had amended its website to no longer refer to Taiwan and Hong Kong as countries rather than Chinese territories, after China issued a similar warning.