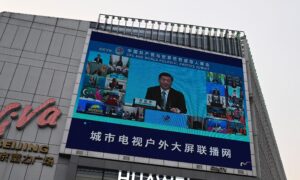 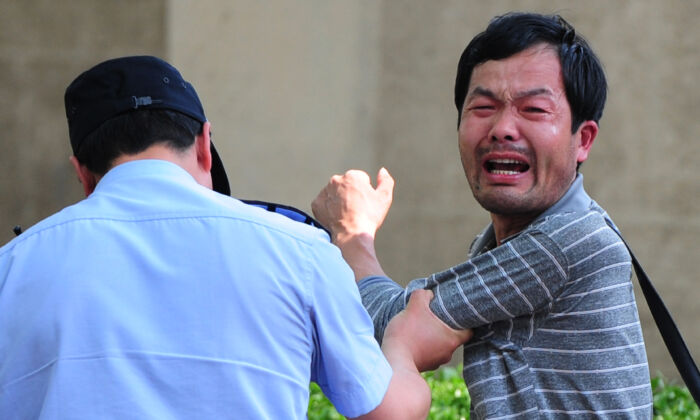 A police officer is detaining a petitioner, who is protesting about medical and land grab issues, outside the Chaoyang Hospital in Beijing, China on May 8, 2012. (Mark Ralston/AFP/Getty Images)
China Human Rights

Chinese Regime Spent Hundreds of Thousands to Block a Petitioner Who Was Seeking $15,000 in Compensation

A Chinese citizen who has appealed for injury compensation for her father for a decade discovered the regime had spent morethan $300,000 to stop her petition, but refused to pay her father a work injury subsidy of less than $15,000.

Furthermore, a document issued by a local authority on Feb. 2, 2020, claimed that they had paid the father almost $30,000 for his treatment, but the petitioner’s family never received it.

Liu Yi, the petitioner’s young sister and legal representative, told the Chinese-language Epoch Times on July 18 that she got the chance to review the petitioner’s legal dossier at the court, in which she found the above-mentioned document.

“During the hearing, I pointed out the regime’s cost on controlling my sister, and none of our family members received any penny that the document described. The judge ignored my words, and just simply skipped the questions,” Yi said.

Liu Li, the petitioner, lives at Hongling street, Bayi town, Sujiatun District of Shenyang city in northeastern China’s Liaoning Province. The father Liu Shuyi was injured when he worked for the local regime in 2009, but the regime refused to pay the work injury subsidy. Without health care insurance or savings, the father couldn’t receive the treatment he needed. Li accompanied her father to petition the Chinese central regime, the only way for Chinese people to defend themselves if they can’t afford an expensive lawsuit in the communist country.

The Liu family was poor and the father Shuyi had to work very hard to make enough money to feed the family. The family lived in extreme poverty when Shuyi couldn’t work and needed money to receive hospital treatments. The family hoped that petition could help them, however, the result was the opposite.

Then 69-year-old Shuyi worked for the Bayi township government as the operator of a coal-fired boiler on the evening of Jan. 12, 2009, when he had an accident on his way to work. On that dark night, a car hit Shuyi from behind when he was riding on his bicycle. The car escaped quickly and Shuyi walked to his workplace with a bleeding head.

According to China’s Work Injury Insurance Regulations, the employer has the responsibility to pay the medical cost and compensation if the employee is injured because of another’s fault on their way going to or leaving from their workplace.

Seeing Shuyi was injured badly, his co-workers quickly sent him to a hospital, but the hospital discharged him after three and a half days because Shuyi’s family couldn’t pay for further treatment, and the township government refused to pay any work injury subsidy, which they should pay according to the employment contract that Shuyi signed with the regime and the laws.

Soon after, Shuyi and Li started their appealing journal for hospital treatment and compensation.

In China, people are granted the right to petition in the constitution. However, the regime treats petitioning as a behavior that could damage the party’s rule. It uses the excuse of “maintaining society’s stability” to detain the petitioners at detention centers, even sentencing them to prison.

Most of the time, the petitions failed because they were stopped and even detained at detention centers by policemen before they could approach the National Petition Office. Li was detained in different prisons several times after the failed petitions. The latest one happened in January 2020, and Li had been detained at Shenyang No. 1 Detention Center for almost 18 months.

Shuyi suffered a lot from the petitions too. He made his last trip on Oct. 27, 2018, and was detained by police from Shenyang city at Beijing Railway Station. With untreated injuries and the threat of being detained again, Shuyi suddenly felt very sick. The police realized that Shuyi might die at any time, and called an ambulance for him. On Nov. 6, 2018, Shuyi died at Tongren Hospital in Beijing at 78.

After Shuyi’s death, Li continued the petition by herself. To make the petition easier, Li found a temporary job in Beijing and moved to the city.

On Jan. 13, 2020, a police officer stopped Li and asked for her ID when she was walking on Fuyou Street, where the National Petition Office is located. The police quickly detained Li because her ID number was on a blacklist of petitioners.

The police sent then 51-year-old Li back to Shenyang and announced an arrest on Feb. 19, 2020. Her sister Yi then applied to be Li’s legal representative because Li was detained inside the detention center and didn’t have freedom of movement. After being approved by the Sujiatun District Court, Yi had the chance to read Li’s legal dossier to the court and took photos of documents detailing the costs to control the petitions.

Most of the $321,000 was spent on police travels from Shenyang to Beijing or other cities when they were trying to stop the Lius, as well as meals, hotel costs, travel allowances, and bonuses for the police. Other expenses include the cost to transport the Lius from Beijing to Shenyang and the cost to detain Li at detention centers and prisons.

The document listed $7,100 given to the Lius as living relief. However, Yi said that Shuyi and Li had never received the money that the street government claimed. She gave an example of the recent unfair treatment they faced.

She said the most ridiculous points of the document include the regime claiming it paid for Shuyi’s hospital treatment in October 2019, but Shuyi died in November 2018. The regime also claimed the Liu family asked for $4 million in compensation, which they never asked for. In two different documents, the regime claimed it paid  $7,680 and $4,310 for Shuyi’s hospital treatment in 2019. Shuyi and Li had never went to Beidaihe, but the regime said it sent officials and policemen to Beidaihe to stopping Li’s petition, costing a huge amount of money.

“We want the street government to explain things clearly to the public,” Yi said. “It has been 12 years, but the regime hasn’t solved my father’s case.”

Yi said that Li and she would report the case to China’s top watchdog, the Central Commission for Discipline Inspection, because they believed that the related officials were engaged in corruption. They suspect that the officials used their case to make a profit for themselves.

“The Chinese Communist regime would rather spend the huge amount of money on controlling people, rather than solve their problems. The Chinese regime is corrupt from central to rural. The officials don’t take any action to benefit people, and don’t care about people’s lives,” Wang Jing, volunteer at Chinese human-rights website—Liusi Tianwang, told the Chinese-language Epoch Times on July 18.