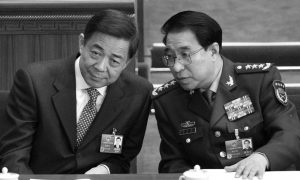 China’s Ministry of Public Security has recently launched a special campaign called “Fox Hunting 2014” seeking to arrest economic criminals who fled China, including many corrupt officials. The destination of choice for high-ranking Communist Party members is North America, according to an academic expert.

The campaign started on July 22 and lasts till the end of this year, according to the Ministry of Public Security (MPS).

“A number of flight suspects are involved in corruption crimes. Their arrests are directly related to the development of the anti-corruption campaign in depth,” said Liu Guojin, deputy director and deputy party secretary of the MPS, said at a press conference on Tuesday.

Liu indicated that the MPS will establish leading teams for each criminal suspect, and mobilize the masses to report information related to the suspects by offering rewards.

Corrupt officials fleeing out of China with large amount of capital has become a significant issue in recent years. China’s procuratorial organs arrested over 18,000 fleeing officials suspected of financial crimes from 2000 to 2011, according to state-run Xiaoxiang Morning Post.

“Among the fleeing corrupt officials, those who have high-level identity and a lot of capital mostly fled to Canada, the United States, and Australia. Those who are lower officials choose Latin America, Africa, Eastern Europe or our neighboring countries. Some Pacific island countries and some countries in Central America are also popular among corrupt officials,” Li Chengyan, professor at the School of Management in Peking University, told Xiaoxiang Morning Post. No publicly released official data has confirmed Li’s analysis.

A major difficulty for the new campaign is that China only has extradition treaties with 37 countries and the United States, Canada, and most of the EU member states are not among them, the report says.

The phenomenon of public officials fleeing is likely to increase this year, according to the Rule of Law Blue Book released this February by Chinese Academy of Social Science. “The chances of flight are especially high for those public officials who have close ties with fleeing officials, and whose capital is already overseas.” the Blue Book says.

Under high pressure from the ongoing anti-corruption campaign, some officials suddenly broke contact or fled during their work trips. Some take visiting family members overseas, treating illnesses, and vacations as excuses to flee, according to state-run People’s Daily this May.

People’s Daily says many of the officials fleeing held positions with significant financial responsibility in state finance, taxation, transportation, and land departments, and so on. The amount of money involved in their cases “often reaches tens of millions or hundreds of millions yuan.” (10 million yuan equals US$1.6 million.)

Most of the corrupt officials who flee have a plan in place.

“Some officials invested and opened offshore companies first … and then colluded with businessmen to get the money out and flee,” said Liao.

More than 10 provinces in China started thorough inspections this year to find out the number of “naked officials,” as a way of identifying corrupt officials.

Only Guangdong Province has given a report so far, finding over 1000 naked officials in the province. Those officials were required either to be demoted or to have their children and spouses move back to China, in order to avoid officials from fleeing and taking corrupt capital out of China, Chinese press says.