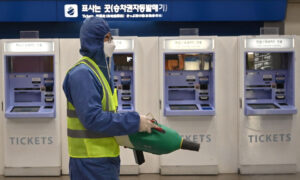 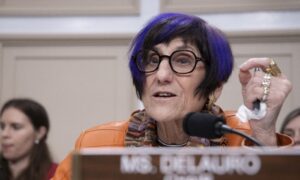 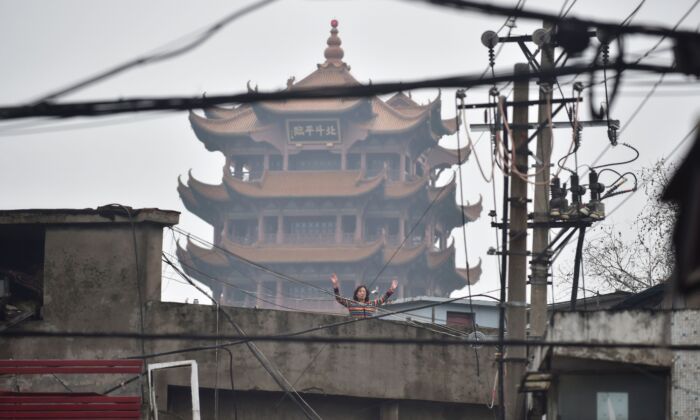 A woman is doing exercises on a rooftop in Wuhan, China on Feb. 26, 2020. (STR/AFP via Getty Images)
CCP Virus

Five senior officials in Jingmen city located in Hubei province, the center of the coronavirus outbreak, were punished by provincial authorities on Feb. 26, after the city reported “-107” new diagnoses of COVID-19 patients.

In fact, 10 cities in the province also reported “negative” patients that day.

The watchdog agency said that these officials “didn’t understand the policy accurately, didn’t do their job properly, and didn’t check the reported data strictly,” which “caused a bad impact [to society].”

The incongruous data occurred due to a change in the Chinese regime’s methodology for diagnosing coronavirus patients.

China’s Center for Disease Control and Prevention (CDC) published guidelines on Feb. 5, which allowed Hubei province to use CT scan results to diagnose whether a patient is infected with the virus. Patients typically exhibit “ground glass opacity,” or indicating fluid in the lungs.

But on Feb. 19, China’s National Health Commission revised the rule and said nucleic acid testing, which involves taking body samples and testing whether it contains the virus genetic sequences, would be the only method to diagnose a coronavirus patient hereafter.

The officials explained that the Hubei total was less than the Wuhan count because other cities had reported “negative” cases upon implementing the new diagnosis criteria.

In other words, some cities had patients whose CT scans were consistent with virus infections, but did not test positive during nucleic acid testing.

After a public uproar about the figures, Chinese officials admitted to their folly.

“The modification of diagnosed data attracted the attention of the public, and people doubted our data,” Tu Yuanchao, deputy director of the Hubei health commission, said at a daily press conference in Wuhan on Feb. 21.

Tu said that he recognized several cities did the same thing of revising down their numbers.

U.S.-based China affairs commentator Tang Jingyuan said that Chinese officials likely lowered the numbers because it shows to their superiors that they are doing a good job in combating the outbreak.

After people complained, “provincial-level officials are asking city-level officials to take the responsibility for reporting irrational data,” Tang said. “It shows you how ridiculous the official data is.”

China’s official infection and death toll figures have been challenged inside and outside China.

According to a series of internal government documents obtained by The Epoch Times, daily new infection numbers collected by the Shandong province Center for Disease Prevention and Control were 1.36 times to 52 times higher than officially published data by the Shandong health commission. Each day, Shandong authorities chose to publicly report only a portion of the internal data collected from hospitals that perform coronavirus diagnostic testing.