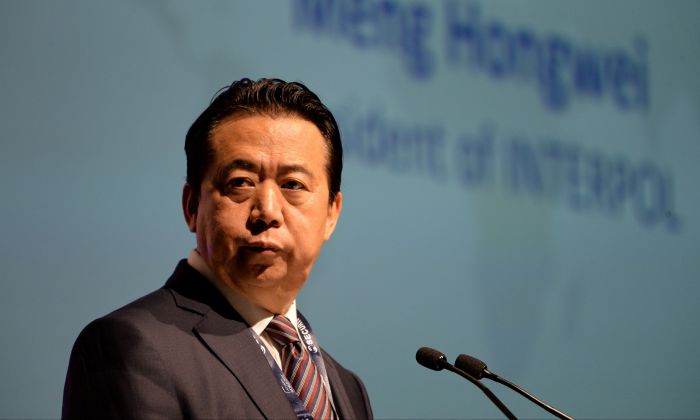 Meng Hongwei, former president of Interpol, gives an addresses at the opening of the Interpol World Congress in Singapore on July 4, 2017. (ROSLAN RAHMAN/AFP/Getty Images)
By Nicole Hao

The Chinese regime announced on March 27 it will prosecute former Interpol chief Meng Hongwei for corruption after an investigation found abused his power, and refused to follow Chinese Communist Party (CCP) decisions.

Meanwhile, the Ministry of Public Security said it would extend its investigation to target associates of Meng in its own ranks.

Last October, Meng’s wife reported that the police chief went missing after he traveled back to China in September. At the time, Meng was also vice minister of public security in China.

A few days later, Interpol, the global police coordination agency, said Meng resigned as president. At the same time, the Ministry of Public Security announced that Meng was being investigated for bribery and other crimes.

The party’s Central Commission for Discipline Inspection said March 27 Meng was expelled from the CCP and sacked from his official position.

The anti-graft body, in a statement, said Meng “refused to execute decisions from the the party center,” and abused his power for private gain, adding that he “wantonly squandered state funds to satisfy his family’s extravagant lifestyle.”

Meng also used his position to help his wife get a job, and took a “huge amount” of possessions in exchange for helping with promotions, job moves, and “company operations.”

Meng, 65, joined the CCP in 1975, and has worked in public security for 40 years. He served as vice minister of public security from 2004, before becoming Interpol president in November 2016. He then moved to live in Lyon, France, where Interpol’s headquarters are located, with his wife and two children.

After the announcement of the decision to prosecute Meng, China’s Ministry of Public Security said it would conduct further investigations into its own senior ranks to “thoroughly root out Meng’s pernicious influence.”

“For those in leadership positions in the Public Security Ministry connected with Meng Hongwei’s case, no matter how high or low, no matter who is involved, no matter their position, all must be seriously handled in accordance with the law and discipline,” the Ministry said in a statement on March 27.

It appears that this process has already started.

The report said that Zheng was close to Meng, and was his most trusted deputy.

Zheng joined the Ministry of Public Security in 1989 after he left the military. He then worked in its watchdog department, the Discipline Inspection Commission before being promoted to the director of the Ministry’s Exit and Entry Administration Bureau in 2010.

In 2016, Zheng was transferred to lead the joint task force with law enforcement in Laos, Burma, and Thailand to patrol the Mekong River.

Meng is among a slew of high-ranking officials who have been ensnared by Xi’s sweeping crackdown on graft and perceived disloyalty.