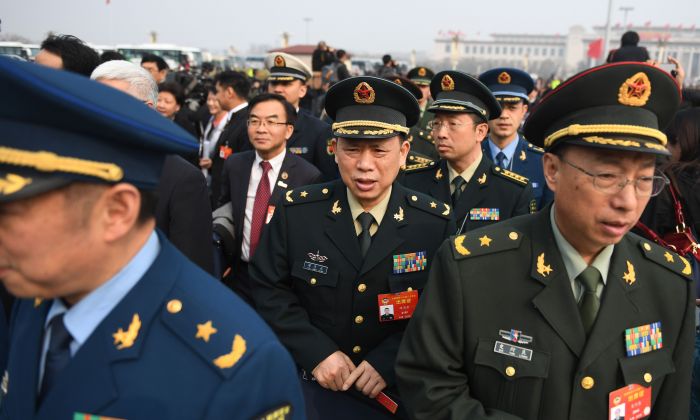 Military delegates arrive to attend the opening session of the Chinese People's Political Consultative Conference (CPPCC) at the Great Hall of the People in Beijing on March 3, 2019. (GREG BAKER/AFP/Getty Images)
Chinese Regime

The Chinese regime has drastically tightened security around the country, placing parts of China under “wartime” security measures, as the biggest event on the regime’s calendar kicks off this week in Beijing.

For the next two weeks, the annual “two sessions” will be held in Beijing. That is, the meeting of the regime’s rubber-stamp legislature, the National People’s Congress (NPC), and its political advisory body, the Chinese People’s Political Consultative Conference.

Almost 3,000 delegates of the NPC, whose roles are mainly ceremonial, are expected to ratify legislation, all of which have been pre-approved by the Chinese Communist Party (CCP).

Every year, the party machine initiates heavy restrictions around China, in particular in Beijing, to stamp out dissent and maintain social control while the meetings take place. This year, however, these measures have been upgraded.

Taiwan’s Central News Agency on Feb. 26 published a copy of a notice of CCP Political and Legal Affairs Commission of Yingyang City, in central China’s Henan Province, ordering the city to enter “wartime mechanisms” during the period of the two sessions.

The notice ordered police to increase surveillance and control measures and to provide daily reports of their actions.

Travelers to Beijing have also been subject to extra security checks.

Party mouthpiece Xinhua reported that all the passengers on trains going to or passing through Beijing from Feb. 26 to March 17 must go through two rounds of security checks before boarding the train. They’re also subject to another security sweep after they disembark the train in Beijing.

The state postal service also initiated double- and triple-checks on all letters and packages posted to Beijing during the meetings.

As with previous years, dissidents and petitioners in Beijing have been detained in extralegal detention centers, or forced to leave Beijing before the two sessions. The detained dissidents typically won’t be released until the meetings end.

As of March 2, Chinese online users from several provinces started reporting on social media that the internet on their cellphones was throttled to 2G speeds.

“My internet was changed from 4G to 3G, and then 2G during the last few days. I really have nothing to say,” Zhang Liang, a Sichuan insurance agent posted on Weibo, China’s version of Twitter, on March 3.

Some netizens suggested that this was caused by a system run by police called “Electric Fence” or “Fake Base Station.”

According to users, this system intercepts cellphone communication with the 4G base station, so police can sweep all text messages, phone calls, browsing history, and other data stored on the phone. This causes a cellphone’s speed to decrease to 2G.

The Hong Kong Economic Journal interviewed officials attending the two sessions on March 2, who said they and their staff aren’t allowed to bring their cellphones into the conference venues. For all emergency communication, participants can only use walkie-talkie radios.

Lu Tianming, a prominent pro-CCP writer, posted photos on Weibo of the hotel where Lianghui representatives were staying, which showed barbed wire fencing. There was also a heavy police presence surrounding the site.

Lu’s post was soon deleted, but people took screenshots and shared them on many websites.

“What kind of country … has to expend this much of its own resources to hold a meeting?

“But China does this every year. And it will arrange for stricter measures in special years [as with this year].”