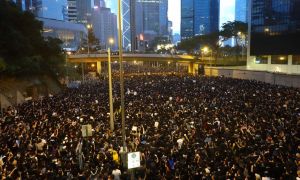 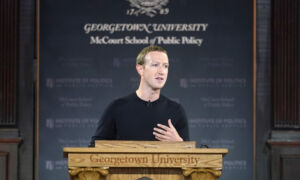 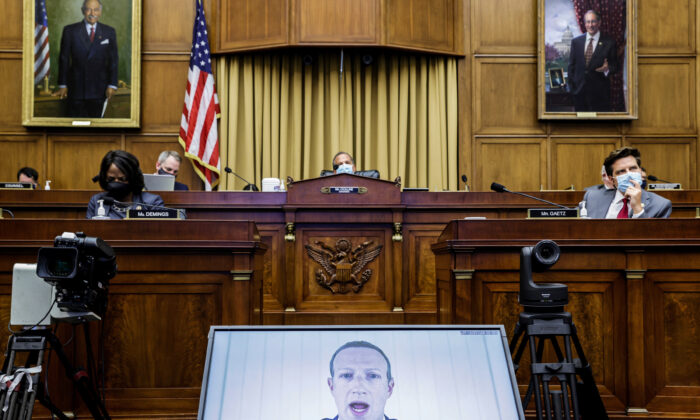 Facebook CEO Mark Zuckerberg speaks via video conference during a House subcommittee hearing on antitrust on Capitol Hill in Washington on Wednesday, on July 29, 2020. (Graeme Jennings/Pool via AP)
Thinking About China

During a Congressional hearing on July 29, Apple CEO Tim Cook, Alphabet CEO Sundar Pichai, Amazon CEO Jeff Bezos, and Facebook CEO Mark Zuckerberg were asked to testify. One lawmaker asked whether the executives believed the Chinese government steals technology from U.S. companies. Zuckerberg told the Antitrust Subcommittee of the U.S. House of Representatives, that it was “well-documented that the Chinese government steals technology from American companies.”

His answer angered the CCP.

Chinese media nicknamed Zuckerberg a Chinese “son-in-law” because his wife, Priscilla Chan, is of Chinese descent. However, she is not a Chinese national. Her parents were Chinese refugees who fled Vietnam and moved to the United States.

Zuckerberg likely earned the nickname because of his previous gestures to please the Chinese regime, such as bringing China’s censorship chief on a tour of the Facebook offices in 2014 and showed off his copy of Chinese leader Xi Jinping’s biography; and jogging in Beijing’s suffocating smog when he visited the city for a business forum in 2016.

His recent honest comments offended the regime. The Chinese article described him as an “anti-China” force, and a “TikTok strangler.” Beijing’s reaction was surely to distract people’s on video-sharing app TikTok and its security issues. It also serves to stir up nationalistic sentiment among Chinese citizens by slandering Zuckerberg.

The article also compared the other three CEOs’ responses to the question. They were subtly praised for not confirming that the CCP had stolen American technologies. Their motive for not speaking freely, of course, was that they all have business interests in China and are afraid of offending the Chinese Communist regime.

The stealing of American technologies is recognized by the regime itself. On Jan. 15, China signed the U.S.-China phase one trade deal, which stated that China would commit to refraining from directing or supporting outbound investments with the objective of acquiring foreign technology pursuant to China’s industrial policies. Still, the regime won’t allow others to say it out loud.

Zuckerberg’s words directly tore the mask off the Chinese Communist regime. The angry regime targeted him, using scolding and abusive accusations tactics similar to the era of the Cultural Revolution.

Facebook ultimately did not enter the Chinese market, and perhaps that allowed Zuckerberg to speak more frankly than the three other CEOs, who were afraid to speak the truth though national security could be at stake.

Will the CEOs of Apple, Google, and Amazon show their conscience and learn a lesson from Zuckerberg? China’s market could earn them some short-term profits, but the price they pay could be very high—it’s putting American innovation at risk.

It is this author’s hope that Zuckerberg will recognize the true nature of the communist regime. Please uphold your conscience and honesty.

It is the same for the CEOs of Apple, Google, and Amazon, as well as many other businesses collaborating with the regime. Reclaim your wisdom, recognition of democracy, and universal values. Decouple from the regime.

Only when American technology companies take the lead in tearing down the Chinese Communist regime’s internet firewall, and join hands with the U.S. administration to defeat the communist regime, will China be a free and open market for the entire peace-loving world.