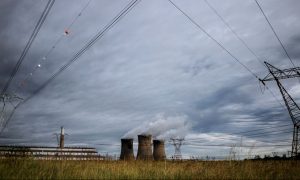 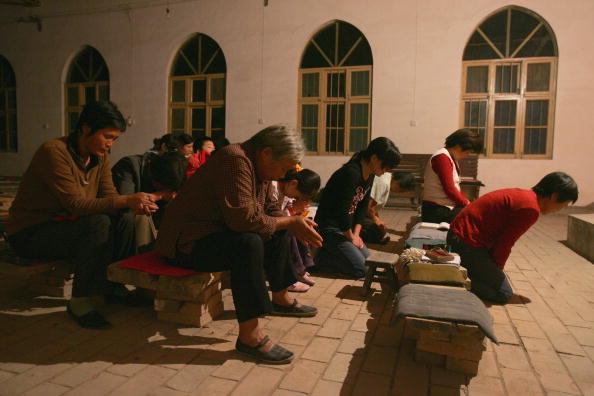 Christians pray during a mass at a village church in the outskirts of Yanshi City, Henan Province, on Oct. 6, 2006. (China Photos/Getty Images)
Chinese Regime

Beijing has intensified its suppression of religious groups, especially in central China’s Henan Province, where authorities have continued to tear down Christian crosses.

The Chinese regime has removed about 7,000 crosses from churches across Henan recently, according to Jonathan Liu, a priest and founder of the San Francisco-based Chinese Christian Fellowship of Righteousness, in a Sept. 10 interview with Taiwan’s international radio station Radio Taiwan International (RTI). Liu said a pastor for a Three-Self Church located in Henan told him the number of crosses while the two communicated through China’s popular social messaging app WeChat.

The Three-Self Church, a Protestant church, is one of several congregations that have received official approval from Chinese authorities, as Chinese law stipulates that religious believers can only worship at government-sanctioned churches. However, millions of Chinese have defied such restrictions to attend congregations at so-called underground or house churches.

Liu added that the cross removal in Henan targeted both government-sanctioned and house churches.

As for why Henan is being targeted by the Chinese regime, Liu explained that Henan is a place of significance for Chinese Christianity since it is nicknamed China’s Galilee—a reference to the site where Jesus is said to have walked on water. In some villages of Henan, more than 95 percent of the local population are Christians, Liu said.

“Even though [Chinese authorities] have never publicly acknowledged this, the reason behind [the Henan suppression] is that the Chinese Communist Party (CCP) wants to secure its rule in the area,” said Liu.

The mass removal of church crosses in Henan is similar to what happened in eastern China’s Zhejiang Province in 2016, according to Liu. Then, crosses from more than 1,700 churches were taken down by Chinese authorities.

They also targeted Wenzhou, a city in Zhejiang that’s known for a large number of churches and practicing Christians, Liu said. That was one of the first areas of China visited by foreign missionaries during the 1800s.

On Sept. 10, the Chinese regime toughened its controls on religious groups in China with new draft guidelines. According to China’s state-run newspaper Global Times, the guidelines require that all organizations engaged in the dissemination of religious information online will need to apply for licenses from provincial religious affairs departments.

The new guidelines also specifically prohibit online religious services from inciting subversion—a catch-all charge for virtually anything the CCP disapproves of, such as opposing the leadership of the Party.

The recent suppression of Christians isn’t limited to Henan. In Beijing, the Zion church, the largest house church in the capital, was shut down by local authorities on Sept. 9, after declaring gatherings at the church illegal.

According to a Sept. 8 report by Association for the Defense of Human Rights and Religious Freedom, an independent nonprofit, restrictions on churches also are occurring in southern China’s Guangdong Province and in Heilongjiang Province in the north.

Liu told RTI that Christianity has become very different under the CCP, because the core of the religion has become toeing the Party line. Christians must be obedient under the regime’s leadership, he said.

For example, during church services, churchgoers are required to sing China’s national anthem or other songs that praise the Party, and pastors are required to read out a set of Party regulations on “religious affairs” before giving sermons.

Ultimately, the Chinese regime turns local Christians into “Pink Christians,” said Liu. Pink in China has the underlying meaning of being very patriotic to the CCP, a play on the significance of the color red in symbolizing communism. The term “Little Pink,” or “Xiaofenhong” in Chinese, for example, means Chinese youth who are nationalistic trolls on the internet who defend the Party against any criticism.