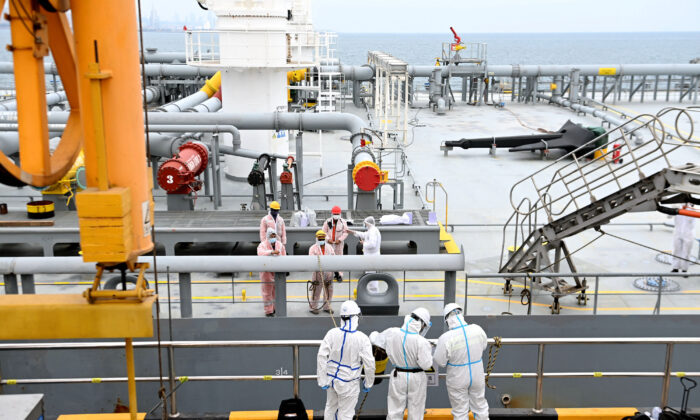 On July 12, China’s top health body announced that nucleic acid swabs and disinfection would no longer be imposed on “low-risk non-cold chain imported goods,” but goods deemed high risk of transmission will still be disinfected.

The announcement came as the regime reported a sharp decrease in its second quarter economic data, underscoring the price of the regime’s zero-COVID policy and challenging Beijing’s whole-year target. Gross domestic product (GDP) grew 0.4 percent from a year earlier, the worst performance since the country began recording data in 1992.

The lifting of the measures aims to “firmly implement” a “dynamic zero-COVID” policy while simultaneously guaranteeing a stable economy, production chain, and supply chain, according to the health body’s notice.

China has been blaming other countries for pandemic outbreaks in the country, and its state media has been reporting the regime’s rhetoric that COVID-19 has been detected on imported frozen food, international parcels, and even apparel from South Korea.

Strict disinfection requirements and PCR tests were imposed on imported frozen food after a cluster of infections among workers at a wholesale food market in Beijing in June 2020.

Six months later, Beijing also advised testing on ambient products too, with online videos showing disinfectants being sprayed on parcels on a conveyor belt in a Chinese post office.

However, scientists said the risk of CCP virus infection through contact with contaminated surfaces was low.

Emanuel Goldman, professor of microbiology at Rutgers University, wrote in an article for the medical journal The Lancet in July, 2020 that “the chance of transmission through inanimate surfaces is very small” and that the risk of transmission is “exaggerated,” adding that such transmission occurs “only in instances where an infected person coughs or sneezes on the surface, and someone else touches that surface soon after the cough or sneeze (within 1–2 h).”

China’s stifling lockdowns and testing requirements have inflicted much pain on the global supply chain, with American carmakers and phones experiencing shortages of components sourced in China, and backlogs that Los Angeles and Long Beach ports experienced last year.

China’s recent announcement also claimed that the CCP virus “only survives for a short period of time on the surface of most objects” at normal temperatures according to “the latest research.” It did not provide details or the source of the research.

Low-risk categories that are waived disinfection and swab tests include bulk cargoes of coal, ore, chemical raw materials, grain, feed, forage, and logs as well as those transported for more than 24 hours since departure or not coming into contact with loaders, according to the official website of China’s National Health Commission.

Chinese netizens expressed anger over the move and its apparent contradictions.

“Since the virus survives for a short time on the surface of an object, then do you intend to continue with your disinfection in our homes?” one netizen asked in a post.

“The Chinese Government has vigourously defended its dynamic zero COVID-19 strategy,” a report published last month by The Lancet states. “But China’s lockdowns have had a huge human cost. This cost will continue to be paid in the future, with the shadow of mental ill-health adversely affecting China’s culture and economy for years to come.” The publication called on the Chinese regime to “act immediately if it is to heal the wound its extreme policies have inflicted on the Chinese people.”