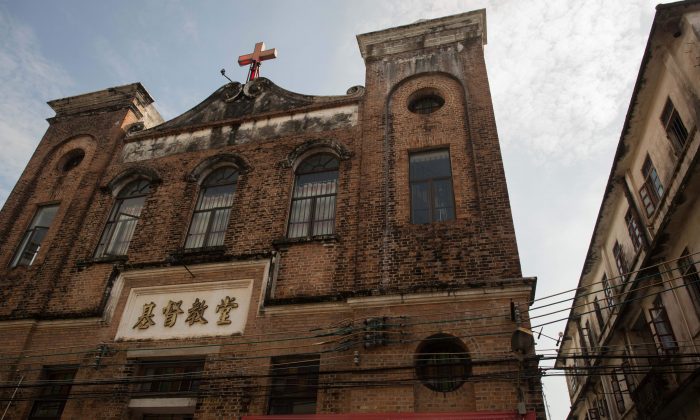 A church in Chikan village in Kaiping, China on May 28, 2018. (Nicolas Asfouri/AFP/Getty Images)
China Human Rights

BEIJING—A prominent church pastor in southwest China is being held by authorities on suspicion of inciting subversion, Human Rights Watch (HRW) said on Dec. 13, amid a campaign by Beijing to clamp down on religion unapproved by the state.

On Sunday night in the city of Chengdu, police and state security officials detained dozens of churchgoers and leaders from the Early Rain Covenant Church, one of the better-known unregistered Protestant ‘house’ churches in China.

Head pastor Wang Yi was detained and held on suspicion of “inciting subversion of state power,” HRW said in a statement, citing an official document sent to Wang’s mother.

The authorities have also searched homes, offices, a seminary, a kindergarten and a bible college related to the church, HRW said. Reuters confirmed the group’s account with activists and churchgoers who had spoken with Wang’s mother.

Since Chinese leader Xi Jinping took office six years ago, the government has tightened restrictions on religions seen as a challenge to the authority of the ruling Communist Party.

“The shutdown of a Protestant church in Chengdu … makes a mockery of the government’s claim that it respects religious beliefs,” Yaqiu Wang, an HRW researcher, said in a statement.

China’s Public Security Ministry did not respond to faxed requests for comment. A Chengdu government official declined to comment when reached by Reuters by phone.

Chinese law requires that all places of worship register and submit to government oversight, but some churches have declined to register, for various reasons.

Late on Tuesday, members of the congregation published a statement from Wang that he had given to them for release in the event that he was held for over 48 hours.

“I am filled with anger and disgust at the persecution of the church by this Communist regime, at the wickedness of their depriving people of the freedoms of religion and of conscience,” Wang wrote, according to the statement.

Wang also wrote that he did not consider it his mission to change the institutions that ruled China: “I accept and respect the fact that this Communist regime has been allowed by God to rule temporarily.”

“Regardless of what crime the government charges me with, whatever filth they fling at me … I categorically deny it,” he wrote.

Churches across China have been under growing pressure to register since a new set of regulations to govern religious affairs came into effect in February and increased punishments for unofficial churches.