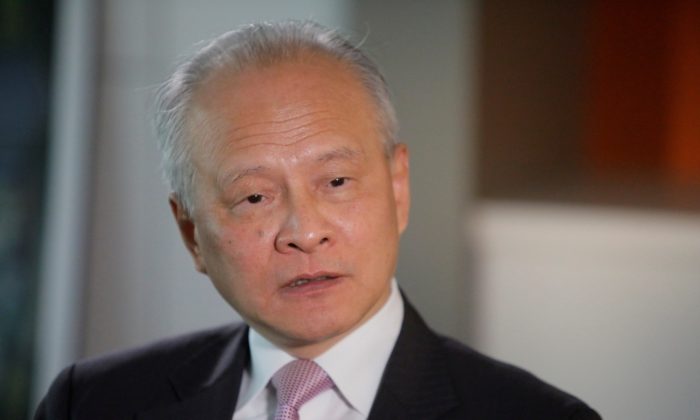 China's ambassador to the United States Cui Tiankai responds to reporters' questions during an interview with Reuters in Washington, D.C. on Nov. 6, 2018. (Jim Bourg/Reuters)
Chinese Regime

BEIJING— Tweets from Chinese diplomats abroad, including seasoned ambassador to the United States Cui Tiankai, have opened a fresh front in Beijing’s increasingly assertive approach to diplomacy. And propaganda may be a sign of things to come as the Chinese regime is becoming more aggressive in its attempts to sway opinion outside China.

Cui sent his first tweets just last week from his newly opened Twitter account, including one about Taiwan, the self-ruled and democratic island China claims as its own, garnering thousands of comments.

“#Taiwan is part of #China. No attempts to split China will ever succeed. Those who play with fire will only get themselves burned. Period,” Cui tweeted, after China threatened sanctions on U.S. firms selling weapons to Taiwan.

And over the weekend, a series of tweets defending China’s policies in the far western region of Xinjiang by diplomat Zhao Lijian, the no.2 at the Chinese embassy in Pakistan, lambasted the United States for its own human rights problems and what he described as hypocrisy.

The recent spate of 240-character missives, a regular channel of communication with U.S. President Donald Trump in his criticism of China, fit a newer, more aggressive type of diplomacy that Beijing is deploying globally, analysts say.

Yuan Zeng, a lecturer in Media and Communications at the University of Leeds, said the diplomat tweets were part of a clear shift in China’s strategy.

“For individual officials to get so openly expressive and assertive, this is really something new,” she said.

Twitter is blocked in China and the diplomats’ messages were in English and aimed at a foreign audience.

Zhao’s tweets were responding to a letter 22 countries signed at the U.N. Human Rights Council last week calling on China to halt detentions in Xinjiang.

He criticized the United States for its poor treatment of Muslims in places like Iraq and at Guantanamo Bay, where al Qaeda fighters are held. He also tweeted a link to a Washington Post story about racial segregation in the capital and then proceeded to write a string of tweets about U.S. gun violence, hate crimes and violence against women.

“If you’re in Washington, D.C., you know the white never go to the SW area, because it’s an area for the black & Latin. There’s a saying ‘black in & white out’, which means that as long as a black family enters, white people will quit, & price of the apartment will fall sharply,” he tweeted in English. He then corrected himself, saying it was the southeast area.

The tweets put China’s diplomatic aggressiveness on full display and reach a larger audience than more conventional media might, but they also may come with a cost, Zeng said.

“I have doubts on how effective it could be to create a better international environment for China either to grow or to lead, as the government has been saying, to peacefully engage with the world,” she added.

Responding to Zhao on Twitter, Susan Rice, who served as National Security Adviser and U.S. ambassador to the U.N. during the Obama administration, labeled the diplomat “a racist disgrace” who was “shockingly ignorant,” and called on Cui to make sure Zhao was removed.

Zhao returned fire on July 15  and noted pointedly that he was based in Islamabad, not Washington, where Cui is ambassador.

“To label someone who speak(s) the truth that you don’t want to hear a racist, is disgraceful & disgusting,” he wrote.

China and the United States have long sparred over human rights.

Cui’s Taiwan tweet received over 2,000 comments, most of which were negative and many of which offered support for Taiwan, potentially highlighting a risk of expanding the propaganda battlefield.

A recent paper in the International Journal of Communication analyzed tweets from official Chinese diplomatic accounts from 2014 to 2018 and found that engagement with platforms that are blocked in China helps extend the reach of “the invisible hand of censorship.”

“We are closer than ever to the center of the world stage,” she wrote last week in the Study Times, a publication of the Central Party School which trains Chinese officials.

“But we do not have a full grasp of the microphone.”