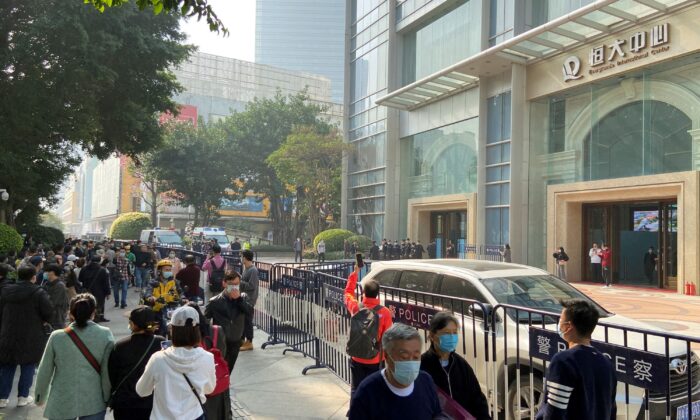 Embattled developer Evergrande’s failure to meet its debt payments has set off a chain reaction in the property sector in China.

Multiple Chinese property developers in different parts of China are experiencing defaults in construction and wage payments as well as overseas and domestic bonds and debts.

The practice of having construction contractors and suppliers pay for projects and workers’ wages in advance has been in place in China for years. However, with falling sales, restricted access to credit and a sector downturn, developers are not able to fulfill their repayment obligations on time.

There have been desperate outcries from contractors and migrant workers on Chinese social media, demanding developers to repay their advances and wages.

An online video clip showed a crowd of creditors gathering outside the headquarters of Jinke Property Group [“Jinke” for short] in China’s southwestern city of Chongqing, smashing a door on the ground floor with posters.

The Epoch Times couldn’t verify the location and time of the video and has reached out to Jinke for comment.

Sina, a Chinese online news portal, reported that Jinke acknowledged there were around 100 migrant workers outside its headquarters on Jan. 27, but that the company denied the allegations of wage defaults.

“This situation [the protesting] is basically unrelated to the unpaid wages of the rural workers, and should be [regarded as] a malicious wage collection,” the company said. It claimed that it had paid the due amount in full, according to Sina.

Migrant workers account for a large number of the heavy physical laborers in the construction and manufacturing industries in China. There were over 52 million migrant workers working in Chinese construction sites in 2020, according to the regime’s top statistical body.

They usually go back home with the year’s hard-earned money for the Chinese New Year, the most important family reunion event that falls in late January or early February, when wage claiming protests occur more frequently and in larger numbers.

Service Worker Notes, a Chinese service industry website, observed that over 5,000 cases of wage claims by migrant workers were recorded before the Chinese New Year in 2015, and thousands of protesting workers were detained by police, adding that the actual number of cases could be much higher.

The website also noted that it usually takes migrant workers 60 days to two years to go through legal proceedings to claim their wages and that they often don’t have the legal knowledge to do so. Therefore, according to the website, workers usually choose more extreme methods to seek help, such as standing on tall buildings, tower cranes, or bridges while threatening to jump off to commit suicide; blocking traffic; and holding banners. These actions are regarded by local authorities as “malicious ways of claiming wages,” the website says.

An inside source of the Chinese property sector, who chose to stay anonymous for safety reasons, told the Chinese-language edition of The Epoch Times on Jan. 29 that Jinke refused to negotiate repayment of wage arrears, infuriating those protesting workers.

According to the source, Chinese developers usually repay advances by suppliers and contractors within six months, but now with the whole industry making a downturn, “the developers can’t sell their homes, and they are strapped for cash. There is no way for them to repay the arrears,” the source said.

State-owned developers have a similar problem, said the source.

“There are very many migrant workers gathering in front of Jinghong and vehicles can’t get near, ” the source told The Epoch Times, “even government-owned developers owe workers money.”

He added that clashes between developers and migrant workers also occurred in other provinces, including Hunan and Hubei.

The Epoch Times could not verify those locations.

Li Keqiang, China’s premier, was reported to have instructed, “roll out more effective measures to resolve the prominent issues concerning the payment arrears of migrant workers,” according to China’s mouthpiece Xinhua News agency on Dec. 25, 2021.

An October 2021 report by The Guardian revealed that the Chinese property sector as a whole owed an estimated $5 trillion, citing analysts at Nomura.