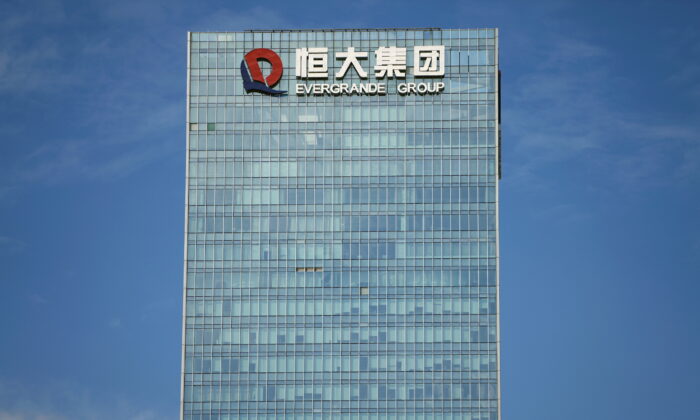 Evergrande’s sales in 2021 fell by nearly 40 percent, and the crisis is still brewing. At the beginning of 2022, Evergrande withdrew its lease and moved out of its Shenzhen headquarters. Evergrande faces huge debt maturities in 2022, including a total of $3.5 billion in bonds due in March and April. At present, Evergrande is negotiating with creditors to postpone the payment of a maturing domestic bond for six months.

On Jan. 10, 2022, reporters from Brokerage China, a Chinese media outlet, visited the headquarters of Evergrande in Shenzhen and found that one of the two “Evergrande Group” advertising signs originally on the building had almost been removed. The interior of the building was empty.

An office leasing agent in Shenzhen was quoted by Jiemian News as saying that the 43-story building, which Evergrande used to occupy, has been rerented for about 230 yuan ($36.2) per square meter per month. According to an insider of Excellence Group, a property management company, although Evergrande has withdrawn its lease, it still owes the rent.

Some employees from Evergrande’s Shenzhen headquarters have moved back to its Guangzhou headquarters, while others remain in Shenzhen and are moving to the company’s own office building, Evergrande Tianjing, according to Guancha.cn, citing sources familiar with the matter.

On the evening of Jan. 10, Evergrande Group announced on its official website that in order to save costs, the company had canceled the lease of Excellence Houhai Finance Center in December 2021 and moved to its own property in Shenzhen.

The move of Evergrande’s Shenzhen headquarters has led to the departure of several employees, Securities Times reported.

It was also reported that Evergrande will sell the group’s buildings in Hong Kong and Guangzhou, but there is no further information on it.

According to Citi’s latest report, Evergrande’s sales in December 2021 fell by 99 percent year on year and only achieved 59 percent of its sales target for the year. Due to the expected impact of property tax and other policies, sales will remain weak in Q1 2022.

Evergrande Real Estate Group’s 2020 public offering of corporate bonds (Phase I) “20 Evergrande 01” to qualified investors was completed on Jan. 8, 2020, with an issue size of 4.5 billion yuan, a coupon rate of 6.98 percent, and a maturity of 3 years. A coupon rate option for the issuer and a resale option for investors at the end of the second year were attached.

The bond will be suspended from trading on Jan. 6. The first bond holders’ meeting in 2022 was held from Jan. 7 to 13, and “20 Evergrande 01” will face the pressure of payment of 4.5 billion yuan on Jan. 8. The purpose of the Evergrande Real Estate meeting is to review and adjust the payment schedule and postpone the payment period from Jan. 8 to July 8.

According to Evergrande’s announcement, the arrangement is “in view of the current operating situation” and the company is seeking investor support for a six-month delay in the date of the bond sale and interest payment.

The delay was expected “given that the company is under pressure to prioritize wages […] and apartments,” Reuters quoted a bondholder as saying.

China’s property developers owe 1.1 trillion yuan in wages to migrant workers and construction workers, which may have to be paid by Jan. 31, 2022, according to a Nomura report.

In addition, interest payments on two of Evergrande’s bonds due on Dec. 28, 2021, totaling about $250 million, were not made as scheduled. The two debts have entered a 30-day grace period and will be in formal default if they are not paid by the end of the grace period.

On Dec. 7, 2021, S&P concluded that Evergrande’s default appeared inevitable. The company faces significant debt maturities in 2022, including a total of $3.5 billion in bonds due in March and April. Evergrande has struggled to restart projects due to difficulties securing new sources of financing. That will continue to weigh on contract sales, the most important source of cash flow for any Chinese developer. In addition, Evergrande’s asset sales so far have not been enough to cover its huge amount of maturing debt.