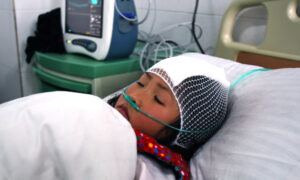 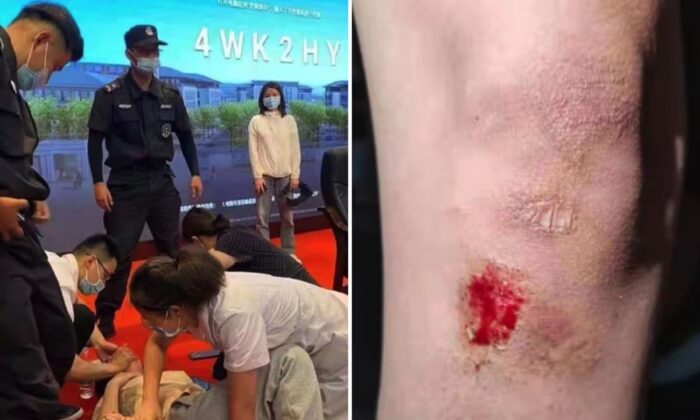 Chinese students clashed with police and security guards on campus grounds at a Chinese university on June 7 and 8, with some students left bleeding after being attacked by police.

Undergraduate students at Nanjing Normal University in eastern Jiangsu Province were protesting on campus over concerns that their academic degrees would be devalued after they learned of a plan by the Chinese Communist Party (CCP) to merge private colleges with vocational ones.

Wu Hua (pseudonym), a student from Nanjing Normal University’s privately owned Zhongbei College, a school of about 10,700 students, told the Chinese-language Epoch Times late on June 8: “Police, assistant police, and security guards started to attack us [protesters]. They poured water on us, pushed us to the ground, and pulled some of us to other places. Some students had abrasions, and some others were bleeding on the head.”

“They [the police] didn’t allow us to leave the campus. … Some students were detained in classrooms.”

A large group of police tactical unit officers entered the campus early on June 8 and beat students and sprayed them with pepper spray, other interviewees told the Chinese-language Epoch Times.

Over the past few days, 15 private colleges from eastern China’s Zhejiang and Jiangsu provinces announced a “downgrading plan” after the CCP’s Ministry of Education earlier this month ordered these colleges to adjust their university qualifications from a regular bachelor’s degree to a vocational bachelor’s degree, ahead of the planned mergers, which would initially impact some 140,000 students.

Private colleges in Chinese universities charge students higher tuition fees and are considered more prestigious than vocational schools. They also offer regular bachelor’s degrees. The mergers gave rise to fears by private college students that their anticipated qualifications would be “downgraded” in value, and would thereby negatively affect their chances of securing a good government job or applying for postgraduate programs amid a competitive environment.

On late June 7, the Jiangsu Provincial Education Department announced that it would suspend the planned merger. Zhejiang and Shandong provincial education departments also suspended the merger.

Authorities only worsened their suppression of students in the early morning of June 8, even after the suspension was announced and when students had yet to learn of the news. Later that day, the students voluntarily withdrew from protesting.

Danyang police in Jiangsu announced on June 8 that Chang Qing, the 55-year-old principal of Zhongbei College, had been “detained” by students for more than 30 hours from the afternoon of June 6 to late June 7.

But students said on social media platforms that Chang was protesting together with students by sitting on the ground in front of a lecture hall. Students provided Chang with water, food, a cellphone charger, and tissues, according to social media posts.

A student with the username “Mint’s Cat” posted on Weibo on June 8: “The principal told us that he would like to sit down with us while waiting for the result [from the regime].”

Related posts were removed from the Chinese internet, but overseas Chinese copied them and reposted on Twitter, which the Chinese regime’s censorship can’t reach.

Students from Zhijiang College of Zhejiang University of Technology were the first to protest the downgrading. On June 4, they gathered inside the university campus, calling for the university to maintain their qualifications.

“Zhijiang students won’t give up. We don’t accept the plan of changing the college’s name and our diplomas,” students wrote on a banner they held, according to photos on social media.

Protests arose at other universities. On June 5, students from Hangzhou Business School in Zhejiang Gongshang University paraded inside their university campus, shouting to demand the university stop the downgrading.

On June 6, students from five universities in Jiangsu Province began protesting. While the protests were going on, the students’ parents went to the provincial education departments and asked the CCP to reconsider the decision.

At Zhongbei College, about 3,000 to 4,000 students joined the protest in front of a lecture hall late on June 6. Students also gathered at the north gate and in front of the library, where they were generally peaceful.

The next day, about 200 police arrived and stationed themselves at the campus while locking down the college, according to Wu. “They [the police] didn’t allow us to leave the campus, which triggered the clash,” Wu said of the evening of June 7.

Police attacked students to the point of bleeding, Wu said. The majority of the students remained on site until about 4 a.m. on June 8.

While students were inside and beaten by police batons, many parents were blocked from entering the campus on late June 7, according to a post by a parent of a student on June 8 on state-run Chinese news website Guancha.

The parent commented that the impact of the downgrading can be significant.

At the end of the post, the parent urged the provincial government to investigate and bring justice to the students.

The Chinese regime started the launch of a vocational bachelor pilot program in February 2019. According to the regime’s plan, the program would train students to be skilled workers and skilled technical staff. Essentially, half of the training time should be spent on practical activities.

In general, students don’t need to have a high score to enroll in the vocational bachelor programs. In May 2020, the regime encouraged private colleges to consider transforming into vocational colleges.

On Jan. 22, the CCP’s Ministry of Education introduced a new policy to ask universities to set up vocational bachelor programs, saying the pilot program had been successful. On June 6, it ordered the private colleges to change their names to be vocational colleges, adjust their educational programs to have a vocational focus, and change the students’ regular diplomas into vocational ones.

The change would be applied to about 186 independent colleges nationwide, according to the ministry’s plan.