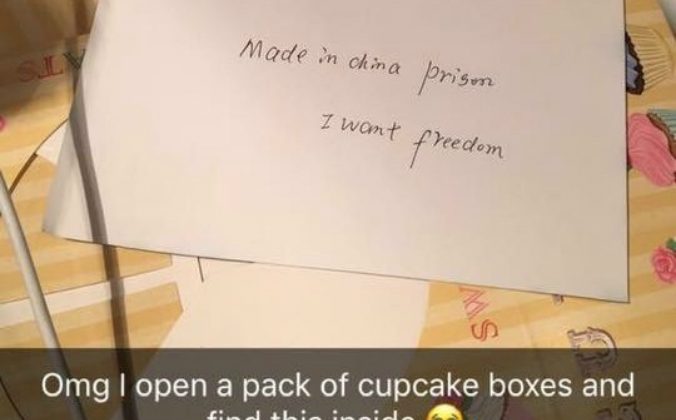 NEW YORK—When Lourdes Figueiredo opened a small set of cupcake boxes bought from a Christmas tree shop months ago, out dropped a piece of paper with the English words, “Made in china prison. I want freedom.”

“I was in shock,” said Figueiredo, a 26-year-old from Yonkers, New York. “At first I thought maybe it was a joke but then after I posted it [on Facebook] I got a lot of feedback saying that it wasn’t the first time something like that has happened.”

In 2013, Julie Keith from Damascus, Oregon found in a box of Halloween decoration a full-page letter by Sun Yi, a prison inmate from the Masanjia Women’s Labor Camp in northeastern China. Sun, who was imprisoned for practicing the persecuted spiritual discipline Falun Gong, included details of the tortures faced by Masanjia inmates and a plea for the letter to be resent to human rights organizations.

Former Chinese Communist Party leader Jiang Zemin ordered the persecution of Falun Gong in 1999, a suppression that persists today. Falun Gong practitioners comprise the majority of prisoners of conscience in China, and remain one of the most severely abused persons of faith.

Figueiredo said that it is “terrible” if the note she found in the cupcake box came from a Falun Gong practitioner or another prisoner of conscience.

“It’s just crazy that they can’t have their beliefs” in China, she said. “I feel really bad for whoever goes through any of that.”

When asked about what she would say to the person who wrote the note if they met—Sun Yi and Julie Keith had their first meeting recently—Figueiredo said that she would “probably cry.”

“I’m a very emotional person,” she said. “I feel really sorry for them.”