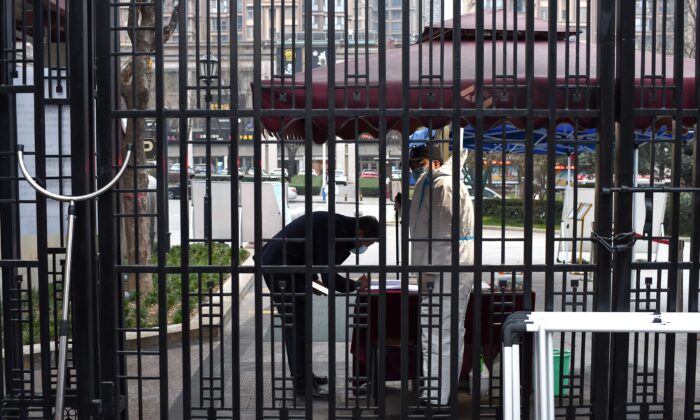 A security guard checks the information of a man at the entrance of a residential area that is under restriction following a recent COVID-19 outbreak in Xian, in China's northern Shaanxi Province on December 23, 2021. (STR/AFP via Getty Images)
CCP Virus

A Chinese person with kidney failure had to go online to get urgently needed dialysis amid massive lockdowns imposed by the local authorities due to a recent spike in COVID-19 cases.

Li Wei, 31, is a resident of Xi’an City, in China’s northwestern Shaanxi Province, the ancient capital of the Qin Dynasty. He suffers from end-stage kidney failure and has been undergoing dialysis treatment for 13 years. Li usually goes to the First Affiliated Hospital of Xi’an Jiaotong University every three days for the dialysis.

Patients who develop end-stage kidney failure need dialysis to keep their bodies in balance and remove waste, salts, and fluid to prevent build up in the body. With renal failure, the kidneys do not get better and patient’s need to have regular dialysis for the rest of their life.

However, Li was unable to get dialysis for 4 days due to a massive lockdown that started on Dec. 18. Fluid had built up in his body, putting him in a critical health situation. With no official response after days of trying to contact outpatient services, he had to ask for help via online posts.

Li was designated as a secondary contact of a person with a confirmed case of the COVID-19 virus on the bus he took on Dec. 10. He was therefore sent to a local Hotel for isolation on Dec. 18.

No Help from Local Authorities or Hospitals

Due to having the disease for a long time, Li’s kidney function has completely failed, as a friend of Li’s, who prefers to be anonymous, told the Chinese edition of The Epoch Times in an interview on Dec. 21.

According to Li’s friend, by Dec. 20, Li’s body had become swollen because of fluid not being removed by dialysis and Li was having trouble walking. He felt tired and had shortness of breath when he moved around. He didn’t have the strength to speak properly, and had to ask his friend to relay his condition.

Li also experienced dizziness, nausea, heart palpitations, and other symptoms. To prevent fluid and uremic toxins from building up in the body, he didn’t eat or consume water for two days. Li gargled with water when he felt thirsty, Li’s friend said. If he didn’t have dialysis, he could suffer heart failure and even die.

Li’s parents were under house quarantine and were not allowed to leave their home. So they kept calling the local pandemic prevention authorities and the Chang’an District government every day. But the only response they got was “coordination is underway.”

Li also kept calling the emergency numbers listed on the official website of the local authorities every day, but his calls weren’t answered. He also contacted the First Affiliated Hospital, but again, the reply was “communication and coordination are underway.” He talked to the hotel management, who told him that they would report his condition to their seniors and government departments. But Li didn’t receive any real help.

He condemned the local authorities for the lack of emergency plans. He had no idea how long he would be isolated or if he could survive until he obtained dialysis.

Li was not the only one in such a hopeless situation.

Ms. Dai is a resident of the Central Neighborhood of Xi’an City’s Yanta District. She also suffers from end-stage renal disease and needs to have dialysis three times a week. However, her community has been in lockdown since Dec. 19, and she hadn’t had dialysis for four days, a Chinese state media reported on Dec. 20.

The Chinese-language edition of The Epoch Times reached out to the local authorities but received no response by the time of publication. The phone number listed for the Chang’an District Pandemic Control Centre on its official website plays a recording saying the number is out of service.

On the afternoon of Dec. 21, Li’s friend told The Epoch Times that an ambulance was on the way to take Li to hospital for dialysis.

“I really appreciate everyone’s help; I was in such a hopeless state,” Li said.

On Dec. 22, the Xi’an local authorities announced the lockdown of the whole city after it reported 52 COVID-19 cases on the same day, in addition to the 57 cases that were confirmed on Dec. 19, The Epoch Times reported on Dec. 22.

But the actual number of confirmed cases may be higher as the CCP habitually censors information in China. Residents told the Chinese language edition of The Epoch Times that there were more than 50 confirmed cases in the Qujiang New District of Xi’an alone.