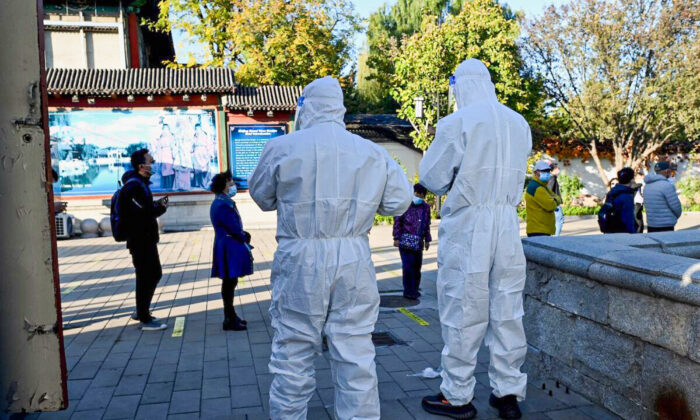 A health workers look at people queueing for swab tests for COVID-19 at a nucleic acid collection station in Beijing on Oct. 26, 2021. (Noel Celis/AFP via Getty Images)
INSIDE CHINA

COVID-19 cases are on the rise in Northern China, prompting authorities in Xi’an city—home to 13 million people—to implement lockdown measures. Meanwhile, a town in the capital city Beijing, known as a hub for Chinese artists, has reported confirmed cases.

On Dec. 22, the Xi’an local authorities announced the lockdown of the whole city, including residential neighborhoods, workplaces, all schools, and indoor venues, due to the recent spike of COVID-19 cases. The city reported 52 COVID-19 cases on the same day, in addition to the 57 cases that were confirmed on Dec. 19.

But the numbers may be higher. Residents told the Chinese language edition of The Epoch Times that there were more than 50 confirmed cases in the Qujiang New District of Xi’an alone.

The city’s primary and secondary schools, kindergartens, and off-campus training institutions have been suspended since Dec. 20. Since Dec. 16, all universities, colleges, and technical schools in Yanta district of Xi’an have begun to close their schools, according to Chinaedunet, the biggest education website in mainland China.

A new round of nucleic acid testing for all 13 million residents in Xi’an began on Dec. 21.

On Dec. 20, it was officially announced that all the pharmacies in Xi’an would suspend sales of medicine to residents.

A local resident surnamed Zhou told the publication that several major hospitals in Xi’an have closed their clinics, including the Aerospace Hospital, the First Affiliated Hospital and Second Affiliated Hospital of Jiaotong University. On Dec. 18, Xi’an Aerospace General Hospital had issued a notice to suspend outpatient and emergency services.

The Epoch Times obtained a video from Chinese social media that showed more than 40 graduate students at Chang’an University being taken away by ambulances on Dec. 20. The netizen who posted the video claimed that the students were exposed to an infected individual, the dean of the college, when they had a meeting with him. The dean had allegedly tested positive for COVID-19.

Meanwhile, in the nation’s capital Beijing, a confirmed case was reported in Songzhuang Town of Tongzhou District, which is known as a hub for Chinese artists. Since 1994, a large number of artists have lived here.

According to the district’s health authorities, on Dec. 19, a student in Huaqing Studio in Xiaobao Village in Tongzhou District, tested positive for COVID-19.

Huaqing Studio is an art training school to help students pass the entry test for art schools. There are currently about 1,500 to 2,000 people in the studio. All teachers and students in the school are quarantined on the spot, waiting for their nucleic acid test results.

A student in the nearby Beijing Chenggong Lushang Studio told The Epoch Times that everyone in the studio was notified to go to the Xiaobao Village Committee for the COVID-19 nucleic acid tests, and he just got tested.

A nearby restaurant closed temporarily on Dec. 19 after the owners were notified by health authorities regarding the confirmed case in the art studio. The owners said they are waiting to take a nucleic acid test and they don’t know when their restaurant can reopen.