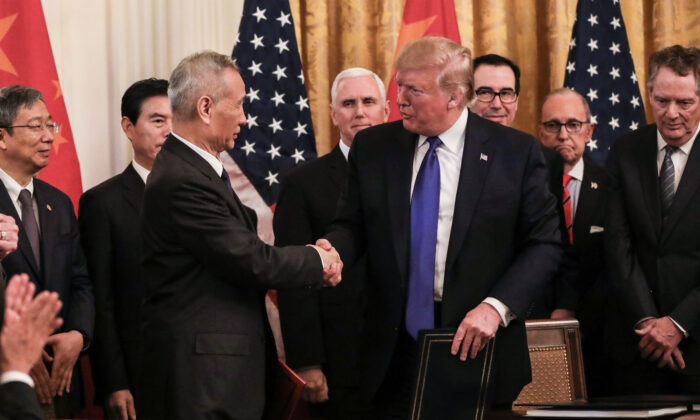 Chinese Vice Premier Liu He (L) and U.S. President Donald Trump during the signing of phase one of a trade deal, surrounded by officials, in the East Room of the White House in Washington on Jan. 15, 2020. (Charlotte Cuthbertson/The Epoch Times)
By Nicole Hao

In response to the signing of the landmark “phase one” U.S.-China trade deal, Chinese netizens criticized the Chinese regime for “surrendering” to the United States—apparently perplexed by Beijing’s compromises, as state media have consistently framed the deal as unequal.

The reaction stood in stark contrast to official statements by Chinese officials and state-run media, which praised the deal, saying it would benefit China and the world.

President Donald Trump and Chinese Vice Premier Liu He, at a ceremony in the White House on Jan. 15, signed the agreement, which included pledges by the regime to buy an additional $200 billion in U.S. goods and services, increase intellectual property protections, and curb currency manipulation.

The United States also agreed to drop planned tariffs on roughly $156 billion of consumer products, and cut tariffs to 7.5 percent from 15 percent on about $120 billion of Chinese goods.

At the signing ceremony, Liu described the deal as a “mutually beneficial and win-win agreement,” adding that Beijing would work to “strictly honor” the pact.

This sentiment was echoed by Chinese foreign ministry spokesperson Geng Shuang, who, at a regular press briefing on Jan. 16, said the deal “is good for China, for the U.S., and for the whole world.”

In May 2019, during heightened trade tensions between the two countries, Geng had criticized the United States’ “flip-flops, violations of consensus, and [acting] in bad faith.”

Meanwhile, Chinese state media also praised the deal, in a break from consistent coverage that has blamed the United States for the trade dispute, while vowing that the regime wouldn’t compromise.

State-run outlet Xinhua published an editorial on Jan. 16, calling the deal “an important step” in the “right direction” toward resolving the dispute, adding that it “brought positive energy to the world economy’s stability and development.”

The trade deal’s provisions on intellectual property “complies with the direction of China’s reforms and opening up, and is needed for Chinese economic innovation and development,” People’s Daily reported, quoting Gao Lingyun, the global economy and politics researcher from Chinese Academy of Social Sciences.

“The agricultural part of the trade deal is equal and mutually beneficial. Chinese farmers and agricultural business will gain tangible benefits,” it stated, citing Cheng Dawei, economics professor from Renmin University of China.

Some Chinese netizens believe the trade deal amounted to the Chinese regime selling out the country on unfair terms.

“The deal is a large gift that Liu Hongzhang gave to Trump,” Chinese netizen Qi Ayi said on his YouTube channel, referring to a 19th-century Chinese general and diplomat of the late Qing dynasty. He signed the Treaty of Shimonoseki with Japan after the Qing empire lost the first Sino-Japanese war in 1895, whereby China ceded Taiwan and opened up its ports to Japan.

“The phase one trade deal is the new Treaty of Shimonoseki … Liu He is betraying our country,” a Chinese netizen said in the comments section of a YouTube live video of the deal-signing.

U.S.-based China affairs commentator Tang Jingyuan believes netizens reacted in that way because they were misinformed by Chinese state media’s skewed coverage of the trade deal.

“Some Chinese netizens can’t understand the real situation of the phase one trade deal, and have been fooled by the government for more than 20 months,” he said in a Jan. 16 interview with The Epoch Times.

Tang explained that Chinese media generally don’t mention China’s trade surplus with the United States, which reached $419.2 billion in 2018. They also deny that Chinese companies have stolen intellectual property from U.S. firms and set up trade barriers for foreign companies operating in China.

“The phase one trade deal is trying to balance U.S.-China trade, and helping China to set up the mechanisms of intellectual property protections, and so on,” Tang said. “But Chinese people can’t understand it now and think the deal means Liu He is surrendering.”