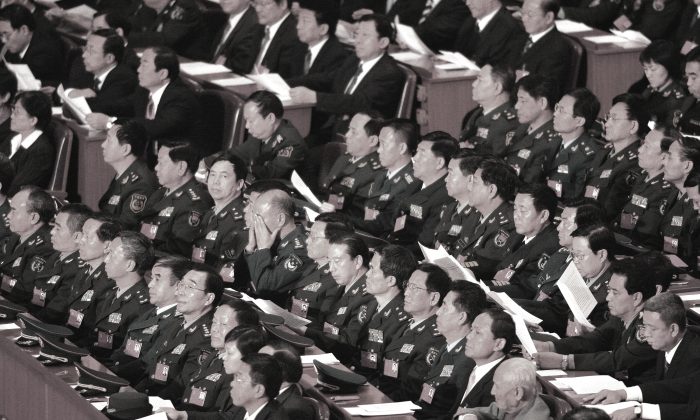 Chinese Communists at 17th Party Congress inside the Great Hall of the People in Beijing October 21, 2007. Chinese communist officials rampantly faked their personal records in order to get better chances for bonuses and promotions. (Frederic J. Brown/AFP/Getty Images)
China

Chinese Officials Lied About Almost Everything in Personal Records, Except Gender

Food and electronics aren’t the only things being faked in China. According to state-run news agencies, Chinese Communist Party officials are also faking their personal records in order to get better chances for bonuses and promotions.

A central inspection team under the Chinese regime’s anti-graft regulator looked into personal records of local officials in 20 Chinese provinces, and after a year of work, they found that fake records were rampant. China’s state-run Xinhua News Agency reported that officials in 15 provinces had altered their personal records—including their names, ages, education levels, and work experience.

In one case mentioned by Xinhua, a local official has almost nothing truthful in her personal record, except her gender. Wang Hongying, chief secretary of the Quality Inspection Association in Taiyuan City, Shanxi Province, who is now labeled “the liar secretary,” faked everything except her gender in her record, including her name, age, work experience, and other areas. Over a third of the 90 seals in her documents were faked, the report stated.

The system to promote officials under the Chinese regime has set criteria for promotions and bonuses including on age, education level, and length of service. In order to clear obstacles for promotions, many local communist officials “white wash” their personal records by “reducing their ages, prolonging their working services, and enhancing their education degrees,” reports Xinhua. Some officials also deleted blemishes from their work records.

In order to show a higher education in their records, many Chinese officials pursue masters or doctoral degrees while holding office, according to Xinhua. However, it’s common for many officials to just buy a college degree.

It was exposed that disgraced former mayor of Zhongshan City, Guangdong Province, Li Qihong, had only graduated from elementary school. On her profile, however, it said she had a master’s degree from the Communist Party School in Guangdong Province. Li Qihong was sacked for corruption in 2009.

Since China doesn’t have a well developed system to prevent and punish such practices, faking records and deleting unwanted information is easy.

A communist cadre who formerly worked at a county-level organization department in Guangxi Province told Xinhua, “Usually, only one staff member takes care of the document room that’s filled with thousands of cadres’ personal records. They are doing a good job if nothing gets stolen from the office.” The cadre noted that as long as you bribe the staff in charge of managing profiles, you can easily fix your record.