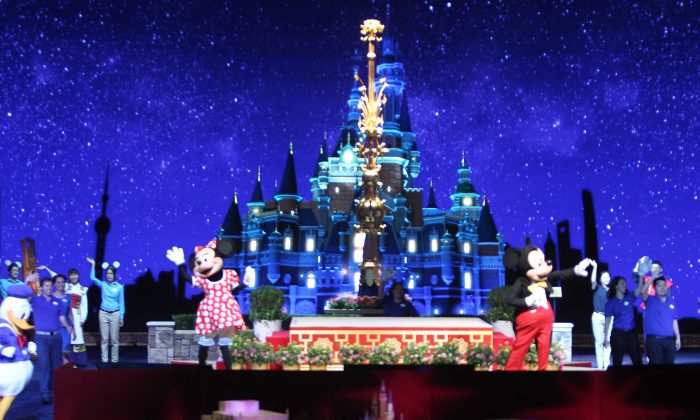 During a session in a prominent Chinese Communist Party annual political meeting that opened recently, a Chinese official seized the national spotlight to trump up the dangers of Western ideology. The latest threat? Disneyland.

“I suggest that we shouldn’t allow too many Disneyland theme parks to be built,” said Li Xiusong, a representative from China’s eastern province of Anhui to the national Chinese People’s Political Consultative Congress (CPPCC), according to state mouthpiece China Youth Daily on March 3. The CPPCC is a political advisory body that serves the purpose of demonstrating the supposedly inclusive nature of one-Party rule in China.

Li Xiusong was likely referring to the upcoming opening of the Shanghai Disneyland Park on June 16.

Disneyland, Li explained, would be hugely appealing to children, but the theme park also disseminates a foreign culture. “If children are exposed to Western culture when they are little, they end up embracing Western culture as grownups, and show apathy towards Chinese culture.”

In order to resolve this “huge problem,” Li continued, the Chinese people should “establish a strong foundation” in Chinese culture so that they would be able to distinguish which aspects of Western culture are suitable and which would be detrimental to the Chinese people, China Youth Daily reported.

Attacking the straw man of Western values and ideology is a favorite strategy of Communist Party propagandists. But often, when Party officials seem to be promoting Chinese culture, they are usually code words for re-interpretations of tradition made to serve the interests of the regime, not an unadulterated presentation of China’s long Confucian heritage.

On Sina Weibo, China’s Twitter-like service, netizens took stabs at both Li Xiusong and the political meeting, the so-called Two Sessions. One netizen from Beijing wrote: “Disneyland conveys the virtues of friendship, compassion and happiness. Are any of these in conflict with oriental culture?” Another netizen going by the name “Carrie_Pak” from Guangdong wrote: “Chinese cartoons are filled with violence while Disney teaches people about truthfulness, compassion and beauty. As parents, which will you choose?”

“You worry too much! Committee Member, why don’t you take a rest!” wrote a Beijing netizen with the moniker “Da Dou Dou.”

A netizen from Fujian wrote: “The Two Sessions is truly the showcase of our representatives’ intelligence.” Another netizen from Shaanxi added “The traditional intelligence competition takes place at a certain hall in Beijing every March … congratulations to Li Xiusong for winning.”

Every March, thousands of Chinese officials, businessmen, and even celebrities gather in the Great Hall of the People in Beijing for the annual meetings of the CPPCC and the National People’s Congress, the Party’s rubber stamp legislature, two of the biggest political meetings in the year. Better known as the Two Sessions, the various influential Party cadres often seize the opportunity to air their thoughts on national issues during official sessions or on the sidelines.