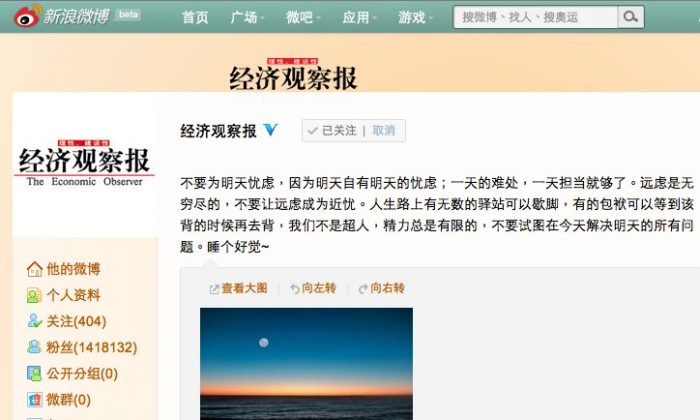 A Weibo post by The Economic Observer seems to make oblique reference to the apparent difficulties the paper encountered recently. This is despite the authorities' statement that reports of it being closed after aggressive reporting on the Beijing floods were merely "rumors." (Weibo.com)
China

Chinese Newspaper Shut Down Over Flood Reporting… or Was it?

After publishing a number of hard-hitting articles about victims of recent floods in Beijing who never made it to the official death toll, the Economic Observer was reportedly shut down. The paper’s plaque was pulled off its wall, its offices were shuttered, and editions were yanked from the racks, according to reports.

But later, authorities said that none of that ever happened. The journal is in normal operations, and the journal’s staff won’t confirm whether they were shut down or not.

Radio France International reported on Aug. 4 in its Chinese edition that according to sources the Beijing Municipal Bureau of Culture raided the paper’s offices under the guise of cracking down on “pornography and illegal publishing.”

The RFI report said that officials from the bureau shuttered the offices, removed a plaque, and confiscated published copies from Beijing newsstands.

The reason was for the Observer’s attempt to accurately report the death toll and damage from the floods in the capital last month.

Officials put the number of dead first at 37, before revising it up to 79 amidst criticism. The latter number was still not seen by Netizens as credible. Thousands took to the Internet on microblogs like Sina Weibo to pour out their grievances over what they called the authorities’ poor handling of the disaster.

Wang Keqin, assistant to the editor-in-chief of The Economic Observer and a well-known investigative journalist in China, published an investigative report titled “Rainstorm Missing Persons,” which detailed what happened to three victims of the Beijing floods. The report described the difficulty their families went through while collecting the remains of the victims, who were not on the official death toll.

Calls to the newspapers offices by Radio Free Asia (RFA) were unsuccessful, according to a report. But RFA said that it spoke to a journalist from the publication, who said that communist authorities had in fact removed the sign from publication’s entrance. The Economic Observer did not reply to an email requesting comment.

Gao Yu, former deputy editor-in-chief for Economics Weekly, a publication that was shut down after the Tiananmen Square massacre in 1989, told RFA that such harsh censorship tactics haven’t been employed for a long time.

Gao’s subscription to the Economic Observer stopped arriving after Aug. 4, she said in the interview on Aug. 7. This must be a “serious matter,” she said, because communist authorities have in recent years more often dismissed the executives of newspapers that did not toe the line, rather than close the entire operation down.

Gao said the regime is prepared to use “heavy-handed tactics” in silencing political opponents and curbing information on sensitive topics, while high-ranking CCP officials gather at a seaside resort in Beidaihe to determine the final details of the Politburo leadership change slated to take place this fall. “This means the regime is facing an imminent crisis,” she said.

RFI left open the possibility that the situation would be resolved, reporting that managers at the Observer were speaking with the authorities about reaching some sort of compromise.

In order to survive, the paper will likely adopt a more censored style of reporting and may replace staff at the top, RFI reported, according to its sources at and close to the paper.

A compromise may have been reached by the morning of Aug. 8. The Beijing propaganda office on its official Weibo account said, referring to reports of the raid of the offices and the paper’s shuttering, that “there is absolutely no such thing, it’s purely rumor.”

According to Sina, a major news portal, the Observer had also claimed that the reports were “rumor,” that no newspapers were confiscated, and the claims of having offices shut were “simply not true.”

It was not possible to find the above posts on either the Economic Observer’s, or the Beijing propaganda office’s Weibo feeds. Searches for “Economic Observer” on the latter produce no results.

If it were indeed all pure rumor, a post to the Observer’s Weibo feed in the late evening of Aug. 9 would have been cryptic indeed. A picture of a sunset or sunrise, illuminating the moon over the ocean was accompanied by text saying “Don’t worry about tomorrow’s troubles… human life has many places to rest one’s feet,” and “We can wait to carry some burdens until the time they need to be carried.”